Mandalorian series two off to strong start | Ratings/Measurement | News | Rapid TV News
By continuing to use this site you consent to the use of cookies on your device as described in our privacy policy unless you have disabled them. You can change your cookie settings at any time but parts of our site will not function correctly without them. [Close]

Having more or less established the Disney+ streaming service from inception and being the driver for the more than 60 million subscribers since last year’s launch, the Mandalorian series two has got off to a strong start according to two sets of research. 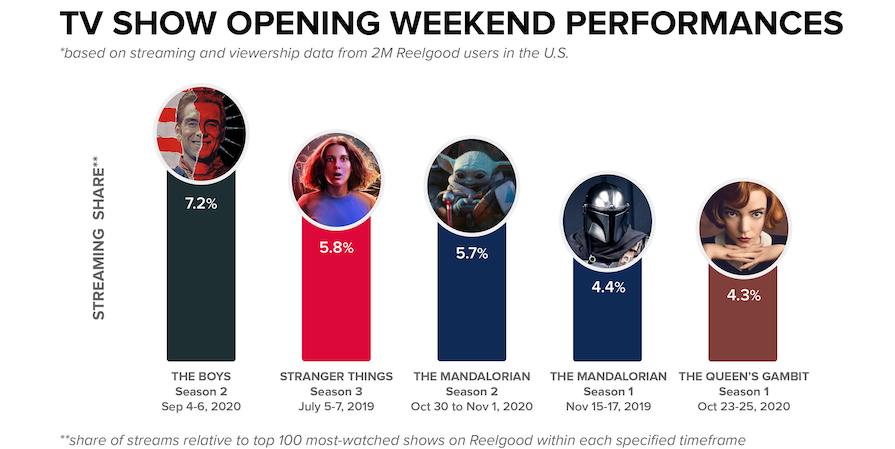 Smart TV usage firm Samba TV found that the premiere of the new series was watched by 1.04 million households on 30 October, its first day on the direct-to-consumer service. This represents a 73% increase compared with the debut of season one on 12 November 2019.

Backing up Samba TV’s figures, film and TV streaming search engine Reelgood investigated how the Mandalorian was received by its more than two million users in the US. For the comparison, it included opening weekend stats for a few other major TV shows such as The Boys, Stranger Things, The Queen's Gambit as well as the first season of The Mandalorian.

Reelgood said that The Mandalorian had performed “spectacularly well” during the weekend of its launch, with a 5.7% opening weekend streaming share, coming close to that for season 3 of Netflix's Stranger Things (5.8%) . That said both trailed in the wake of the second season performance of Amazon Prime's The Boys (7.2%).

It did however beat the opening weekend of the first season of The Mandalorian (4.4%) – attributed in the main to the massive growth in Disney+ subscribers during 2020 - and season 1 of The Queen’s Gambit (4.3%).