Gen Z increasingly take up mobile for video consumption | Ratings/Measurement | News | Rapid TV News
By continuing to use this site you consent to the use of cookies on your device as described in our privacy policy unless you have disabled them. You can change your cookie settings at any time but parts of our site will not function correctly without them. [Close]

In a market snapshot highlighting the importance of mobile video among an increasingly important demographic, Parks Associates has found that viewing on a smartphone or tablet now accounts for over 40% of all video hours for Gen Z. 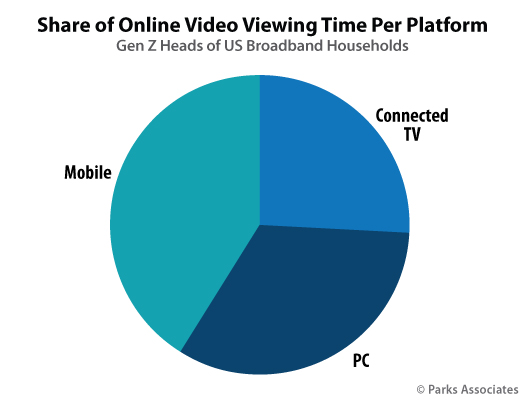 The study noted that Americans overall view more video on TVs than on PCs, and PCs more than mobile devices. However, it added that device preference was strongly generational, and both millennials and Gen Z do most of their viewing on devices other than TVs. Among Gen Z, they dedicate the largest share of their viewing time to mobile devices, then PCs, with the TV having the smallest share. The research showed that the Gen Z mobile video consumption level was twice that among all heads of US broadband households. Among millennials, while the TV has the higher share of viewing than PCs and mobile independently, collectively the two platforms account for almost two-thirds of viewing time.

“Since the introduction of the PC, and later smartphones and tablets, consumers’ viewing habits have evolved to include these new device types alongside the television. In 2020, Americans as a whole are largely multiscreen. Almost two-thirds of consumers view on multiple devices, including their mobile device, a TV, or a PC,” said Kristen Hanich, senior analyst, Parks Associates.

“These devices have become increasingly important to consumers, with mobile devices and PCs together capturing roughly half of consumer-reported viewing time. Multiplatform viewing is highest among members of Gen Z, signifying that these viewers demand equal support for mobile, PCs, and TVs. Companies in the entertainment space, particularly those targeting members of Generation Z, must make mobile and PCs part of their plans.”

“The data from [OTT Video Viewership: The Role of Mobile] tells a clear story. Viewers are watching OTT video across all devices, and Gen Z's high affinity for mobile means its role is going to continue growing in the upcoming years,” added Penthera CMO Jodi Susman. “There's also an important lesson here for the industry: it's crucial to ensure a seamless experience on all platforms.”