US OTT market racks up close to 300 services | Media Analysis | Business | News | Rapid TV News
By continuing to use this site you consent to the use of cookies on your device as described in our privacy policy unless you have disabled them. You can change your cookie settings at any time but parts of our site will not function correctly without them. [Close]

US OTT market racks up close to 300 services

Even in what was already a cut-throat arena, competition is intensifying in the US over-the-top market according to research from Parks Associates which calculates that that by the end of the third quarter of 2020, the number of OTT video services in the US had more than doubled since 2014. 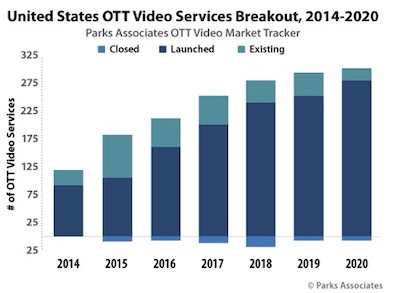 This means, said the OTT Video Market Tracker report, the total is currently reaching nearly 300 different services. Moreover, the rate of service closure has also declined, from a peak in 2018 when 19 services left the market, to only six ceasing operations in 2020 so far.

Looking at drivers for growth, the study noted that as cinemas began to reopen in the US over the summer, film studios had to weigh their options in releasing new titles. “The decision to delay the latest James Bond film No Time to Die hit the theatre industry hard, and Disney’s announcement to move the Pixar film Soul to Disney+ shows studios are putting more emphasis on streaming as many theatres remain closed or at limited capacity,” observed Parks Associates research director Steve Nason. “We could see studios who also own streaming services experiment more with different transactional and windowing options within their offerings, as Disney did with Mulan on Disney+ in September.”

The OTT Video Market Tracker also described the recently announced partnership between NBCUniversal and Roku to distribute the Peacock streaming service as a “win-win” for both parties.

“Through this partnership, NBCUniversal gets its new marquee OTT service on one of the leading streaming video platforms, and Roku gets a significant incremental revenue bump from Peacock’s advertising, no matter the split,” Nason added. “The agreement will yield large gains of users and paying subscribers for Peacock as it takes on the Big Three in OTT and newer entrants from Disney, Apple, WarnerMedia and ViacomCBS.”