Nearly 60MN US broadband homes to be MVPD-free by 2025 | Media Analysis | Business | News | Rapid TV News
By continuing to use this site you consent to the use of cookies on your device as described in our privacy policy unless you have disabled them. You can change your cookie settings at any time but parts of our site will not function correctly without them. [Close]

Nearly 60MN US broadband homes to be MVPD-free by 2025

More bad news predicted for the US pay-TV arena as a study from The Diffusion Group calculates that by 2025 more than half of US broadband households will live without a multichannel video programming distributor. 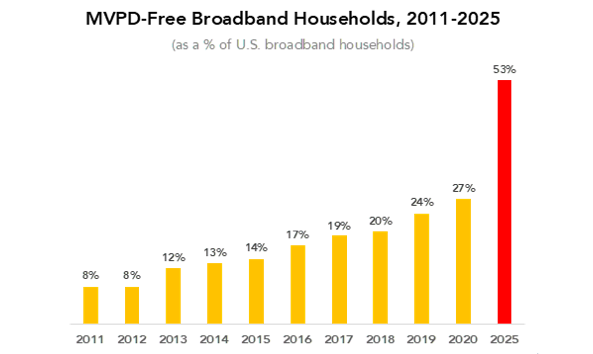 The research consultancy forecasts five-year losses to increase four-fold between 2020 and 2025 compared with between 2015 and 2019. That is, during this time, pay-TV services will lose 36% of their 2020 subscriber base, up roughly four-fold from the prior 5-year period (9.5%). that would mean 58 million US broadband households woul have no MVPD contract.

TDG says that its 2020-2025 forecasts reflect two recent insights: the rate of decline in legacy MVPD subscriptions exceeding its previous worst-case scenario; and consumer research reveals cord-cutting proclivities reaching a record high. Indeed, legacy MPVD subscribers at the end of 2019 totalled 81 million, well below TDG’s least-optimistic forecasts. “For the last decade, TDG accurately anticipated the rate of legacy’s decline and the sluggish growth of vMVPDs,” said Michael Greeson, president and principal analyst at TDG. “However, our [previous] forecasts underestimated the growth in cord-cutting and overestimated the uptake of virtual MVPDs.”

Given these trends, TDG expects that 2025 will see less than half of US broadband households subscribing to an MVPD service. “These video nomads have a very different concept of home video than their predecessors—one that costs less and includes a more self-determined channel line-up” Greeson added.

GOing forwad, the analyst believes there will be a new viewing paradigm largely defined by an evolving set of paid, transactional, and free video streaming services—in a third of cases supplemented by over-the-air (OTA)—configured not by a pay-TV operator but by household decision-makers.