Almost a fifth of US Internet users accessing AVOD | Media Analysis | Business | News | Rapid TV News
By continuing to use this site you consent to the use of cookies on your device as described in our privacy policy unless you have disabled them. You can change your cookie settings at any time but parts of our site will not function correctly without them. [Close]

Almost a fifth of US Internet users accessing AVOD

Spearheaded by Fox-owned Tubi, whose catalogue size said the analyst is larger than that of Netflix, the ad-supported video-on-demand market looks set for meteoric rise said research from Ampere Analysis with 17% of Internet users in the US using one or more AVOD in the third quarter of 2020, up from 13% in Q3 2019. 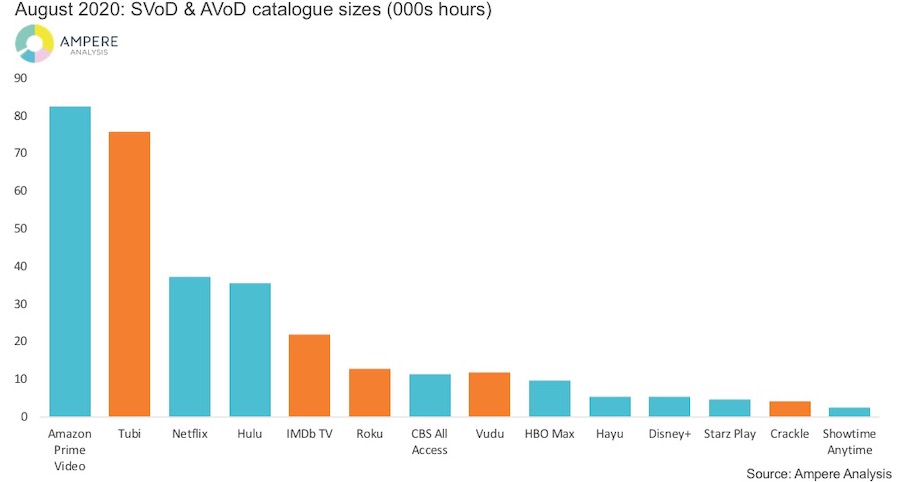 The study said that the rise of AVOD services has been like SVOD services before them, with very different audiences are different. That is older and more likely to be from low income households than their SVOD user counterparts.

The rise of AVOD services comes even though revenue streams have been under pressure in 2020, as advertisers pulled back on spend. However, Ampere observed that the major AVOD services are still nascent, and now following a series of acquisitions, such as Fox’s of Tubi, they are largely backed by well-funded media and technology firms. As a consequence, Ampere does not anticipate Covid-19-linked ad-demand issues will be a fundamental issue for the groups.

Among the most popular AVOD platforms, Tubi offers more than 29,000 titles, over five times as many films as Netflix. It’s beaten only in terms of overall catalogue size by Amazon Prime Video. Such large and diverse catalogues are regarded as crucial for AVOD services to ensure regular engagement, as advertising revenue is highly dependent on user consumption – a contrast to subscription VOD services which can subsist on smaller catalogue bases, providing key titles are sufficiently high profile.

Despite their similar catalogue size, and the growing user base on AVOD , Ampere believes that the two platforms aren’t competing for exactly the same audiences. It says that active AVOD users tend to be older than SVOD subscribers, and are more likely to be from lower income households. The research found that a quarter of AVOD users are aged 45 to 54 compared with 22% of SVOD viewers, and 19% of AVOD users are aged 55 to 64 versus 14% of SVOD subscribers.

“Despite some resistance to the high levels of advertising on US broadcast channels, 44% of consumers in the US still say that they don’t mind seeing advertising on TV, so AVOD services are quickly filling a market position,” remarked Minal Modha, consumer research lead at Ampere Analysis.

“With distinct audiences, we believe that these two offerings aren’t competing directly with each other but rather can coexist. We have seen some companies offer both a free and paid-for tier, such as Amazon’s Prime and IMDb TV, Hulu and NBC’s Peacock. In the current climate with both economic uncertainty and a greater need for people to stay at home, we expect the use of AVOD services to continue to rise as more consumers will be turning to these platforms as they seek entertainment without increasing their financial outlay.”