Global pay-TV grows by more than 3MN new subscriptions | Media Analysis | Business | News | Rapid TV News
By continuing to use this site you consent to the use of cookies on your device as described in our privacy policy unless you have disabled them. You can change your cookie settings at any time but parts of our site will not function correctly without them. [Close]

Despite what has been a challenging past couple of years for the industry as it fends off the ever-increasing challenge of streaming providers, the worldwide TV market actually grew in the second quarter of the year according to research from Ampere Analysis. 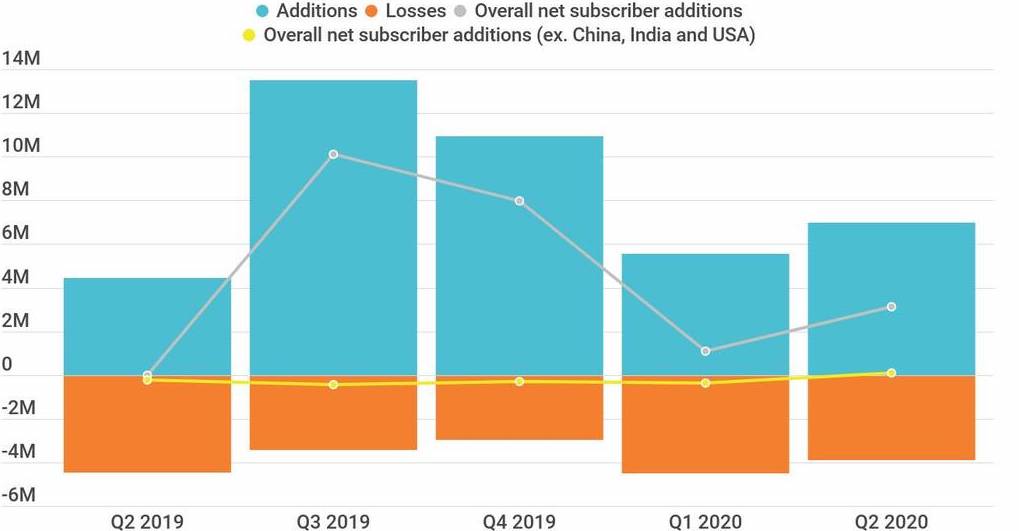 The Ampere's pay-TV market bellwether report took a set of over 70 reporting companies which account for more than half of the world's 1.1 billion pay-TV subscribers. Across this group of companies, Q2 pay-TV subscriber totals were 0.5% higher than in Q1 2020, indicating that despite the increased economic pressures and cancellation of live sport globally, there was still room for growth, particularly in emerging markets.

However, Ampere stressed that the numbers are highly regional and noted that by excepting China, India and the US, global net additions across bellwether companies would have seen just 0.1% growth, up from a 0.2% loss in Q1 2020. It added that the seven bellwether companies in the US have suffered more than 6.3 million net subscriber losses in the past four quarters. Countries such as France and Spain, which saw the largest bellwether net additions in more than a year, were found to be offsetting losses from the likes of Canada, whose four bellwether companies saw their second largest combined quarterly subscriber loss ever.

Of the bellwether companies which had reported at the time of publication, 44% saw growth in the quarter, with positive net additions of nearly 7 million subscribers. This was partially offset by the remaining 56%, which lost a total of nearly 3.9 million customers. The net effect was a growth of just over 3.1 million pay-TV subscribers in the quarter.

China had more than 3.1 million net additions across bellwether companies, has therefore had a significant role in keeping the global pay-TV market buoyant. Outside mainland China, bellwether pay-TV operators in the rest of the world lost around 1.1 million net subscribers in total. The US is once again the loss leader, seeing losses of 1.4 million subscribers in the quarter across bellwether companies, although saw slight growth from Charter and very slight recovery from DISH, which had both suffered last quarter.

The biggest losers in the period in proportional terms were Australia and Denmark. The former territory was hit particularly hard by the lack of sport in Q2, as well as the loss of almost 200,000 commercial subscribers year/on/year. Denmark has been suffering pay-TV losses since Q4 2016, and the USA.

Spain performed the best, with Telefónica's Movistar seeing its highest subscriber gains since Q4 2018. Other winners included Russia, whose growth was driven by Rostelecom, which saw growth of around 160,000 subscriptions, more than triple its growth in the previous quarter, as well as Romania, India, China and France.

“While some countries are seeing pay-TV subscriptions suffer due to the COVID pandemic, particularly caused by the transient loss of sport, there is still growth in the market, driven partly by bundling of services and by emerging markets,” commented Ampere Analysis senior analyst Toby Holleran. “Cord-cutters in a number of developed territories like Canada — whose pay-TV market continues to mirror its North American neighbour — are being replaced by newer TV customers in emerging markets, leaving the market as a whole stable. But there is a little growth left even in some developed nations such as France and Spain which are bucking the trend of stagnation in Western territories."