Over 6MN US households to cut the cable cord in 2020 | Ratings/Measurement | News | Rapid TV News
By continuing to use this site you consent to the use of cookies on your device as described in our privacy policy unless you have disabled them. You can change your cookie settings at any time but parts of our site will not function correctly without them. [Close]

Over 6MN US households to cut the cable cord in 2020

Even though there are just over three months left in the year, the story of 2020 can almost certainly be told already with success for streaming and, says research from eMarketer, historic lows for pay-TV. 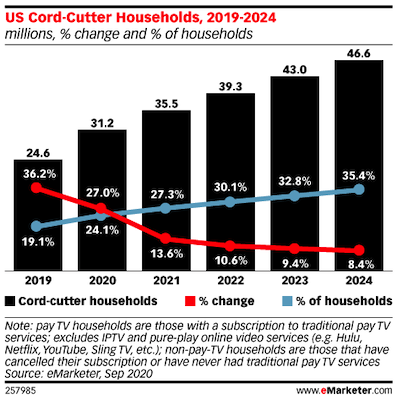 That leaves 77.6 million US households with cable, satellite, or telecom TV packages, down 7.5% year-over-year, the biggest such drop ever. Furthermore, that total is down 22.8% from pay TV’s peak in 2014. By the end of 2024, fewer than half of US households will subscribe to a pay-TV service.

“Consumers are choosing to cut the cord because of high prices, especially compared with streaming alternatives,” said eMarketer forecasting analyst at Insider Intelligence Eric Haggstrom. “The loss of live sports in H1 2020 contributed to further declines. While sports have returned, people will not return to their old cable or satellite plans. As pay-TV subscriber losses accumulate, cable providers have been focusing on their internet services, which are more profitable and have benefited from the consumer shift to streaming video.”

The eMarketer study also found that the loss of viewers will generate a commensurate hit to traditional TV ad spending. It forecast that total spend will drop 15.0% in 2020 to $60.00 billion, the lowest the industry has seen since 2011. Furthermore, the study predicts that TV ad spending will remain below pre-pandemic levels through at least 2024.

“While TV ad spending will rebound in 2021 with the broader economy, it will never return to pre-pandemic levels,” Haggstrom added. “Given trends in cord-cutting, audience erosion, and growth in streaming video, more ad dollars will shift from TV to digital video in the future.”