High-end scripted content to face production delays for at least 12 months | Media Analysis | Business | News | Rapid TV News
By continuing to use this site you consent to the use of cookies on your device as described in our privacy policy unless you have disabled them. You can change your cookie settings at any time but parts of our site will not function correctly without them. [Close]

Research from Ampere Analysis has revealed that producers of high-end scripted content will face Covid-related delays for far longer than their unscripted counterparts leading to questions as to how producers of linear TV’s most popular content can meet consumer demand for recent, relevant and local content. 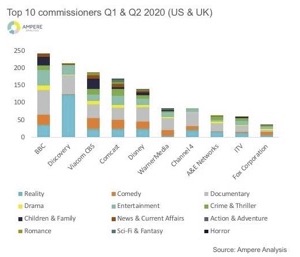 The bottom line prediction in the research is that producers of new scripted content—which typically spends an average of 11 months in production—will be battling against Covid-related delays well into 2021. Ampere compared this situation with unscripted content, which spends an average of just two months in production, and whose producers have been able to adapt production to the new circumstances, already overcoming the worst period of delays.

What this has meant says the research is that unscripted commissions have increased from 66% in Q2 2019 to 72% in Q2 2020, compensating for the lack of new high-quality scripted content. Reality shows have been the key beneficiary, with 24% more titles commissioned in Q2 2020 than in Q2 2019. The temporary stop in production also forced programmers to air older and less popular content to fill gaps, and some have turned to unscripted material to pad their schedules.

By contrast, Ampere said that by mid-September 2020 almost half of all scripted commissions from the first half of 2019 had yet to be released, highlighting the long production periods for scripted shows, and the impact of exposure to the Covid-linked production hiatus. As a consequence, delays for scripted titles ordered in the same period in 2020, also exposed to the production shutdown, will likely run well into 2021.

Going forward, the analyst said that the production of some scripted genres like drama and romance can often be expedited, the ability to shorten the often lengthy post-production process for genres such as action and adventure, sci-fi and fantasy and horror —while maintaining output quality—will be key to limiting the onward impact of the pandemic.

“This is particularly problematic for channels that offer a high proportion of original scripted content. To maintain a competitive edge, they will need to adjust their acquisition models to compete in the race to broadcast new, high-quality content. This suggests a time to shine for independent studios with scripted projects already in the pipeline. However, with indies facing their own delays, it’s likely that supply will be outweighed by demand for the foreseeable future.”