Eastern Europe SVOD subs to double by 2025 | VOD | News | Rapid TV News
By continuing to use this site you consent to the use of cookies on your device as described in our privacy policy unless you have disabled them. You can change your cookie settings at any time but parts of our site will not function correctly without them. [Close]

Eastern Europe will have 26.42 million paying subscription video-on-demand (SVOD) users by 2025, more than double from the 10.26 million recorded by the end of 2019, says a study from Digital TV Research. 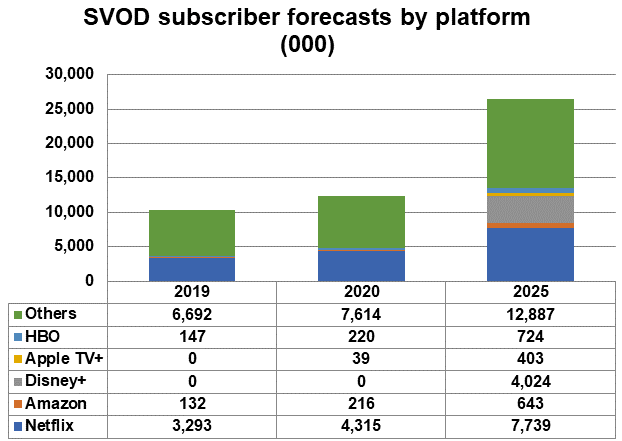 The Eastern Europe SVOD Forecasts report identified Russia as the SVOD powerhouse, and of the 16 million additional subscriptions that are projected the country is forecast to generate 4.8 million subs to take its total to 8.8 million and Poland 5 million to total 8.7 million.

In the analysis, Digital TV Research found that Russia became the SVOD subscription market leader in 2019 by overtaking Poland. Yet even though it has plenty of home-grown players, the analysis suggests that Russia’s SVOD sector will remain held back by the limited presence of foreign platforms.

In terms of platforms, Netflix is set to continue to lead the Eastern European SVOD sector. The service is expected to have 7.74 million subscribers by 2025, more than double its 2019 total. Disney+ will likely have 4.02 million subscribers by 2025 despite starting as recently as early 2021. Sister company Hulu may follow in key markets such as Poland. HBO already has a pay-TV presence in many countries, which can be used as a springboard for HBO Max.

The Eastern Europe SVOD Forecasts report concluded that such platforms will not make great inroads into Russia. It noted that the Russian regulator introduced a 20% foreign ownership equity limit on OTT platforms.
Tweet