Federation Kids & Family teams with TeamTO on animated comedy | Deals | News | Rapid TV News
By continuing to use this site you consent to the use of cookies on your device as described in our privacy policy unless you have disabled them. You can change your cookie settings at any time but parts of our site will not function correctly without them. [Close] 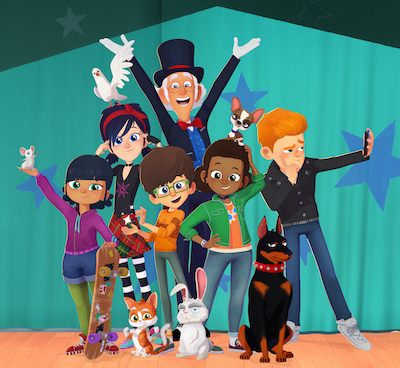 Based on Studiocanal’s theatrical hit, Presto! School of Magic (52 x 11’) features a band of talented and curious kids who dream of becoming magicians. Star students Dylan and Lisa cannot believe how lucky they are to be part of this new school while Lorenzo, a retired magician of international renown, and his nephew have turned their old mansion into Presto! School of Magic, where Lisa, Dylan and fellow aspiring magicians Nica, Violet and Vincent, learn the tricks of the trade. They all have a different reason for attending the school – but they have one thing in common: a passion for illusion, conjuring and the art of magic.

Produced by TeamTO in co-production with Belgian partners Panache Productions and La Compagnie Cinématographique, the series has also secured partnerships with French broadcasters M6 and Canal+. The project between Federation Kids & Family and TeamTO marks a first-time collaboration between the two companies.

Federation Kids & Family has teamed-up on this original new animated series as the worldwide distributor, managing all television rights outside of China.

“TeamTO has a solid reputation as one of the most creative studios in the industry today, and its unique productions share the same high-end values that complement our existing premium titles,” remarked Monica Levy, head of sales at Federation Kids & Family. “Presto! School of Magic is an amazing series that has all the exceptional ingredients to inspire magic-loving kids the world over, and the timing for such an uplifting exceptionally crafted production is perfect.”

Added TeamTO president and co-founder Guillaume Hellouin: “We’re thrilled to begin this partnership with our good friends at Federation, a company that - like TeamTO - has established itself as a leading player in the global kids market. Our creative visions for Presto! School of Magic are perfectly aligned, making them an ideal choice to distribute to all our friends around the world.”