Asia Pacific to generate 200MN SVOD subs by 2025 | VOD | News | Rapid TV News
By continuing to use this site you consent to the use of cookies on your device as described in our privacy policy unless you have disabled them. You can change your cookie settings at any time but parts of our site will not function correctly without them. [Close]

Asia Pacific will have 467 million SVOD subscriptions by 2025, up from 267 million in 2019, according a study from Digital TV Research. 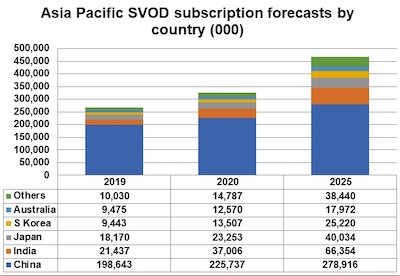 The Asia Pacific SVOD Forecasts report calculates that China will contribute 279 million total SVOD subscriptions in 2025, representing three-fifths of the region’s overall number. India will supply a further 66 million, which would be triple its 2019 total.

Looking at SVOD additions between 2019 and 2025, of the 200 million new customers, China is set to supply 80 million, Japan 22 million and India 45 million. China is forecast to add 27 million SVOD subscribers in 2020 alone.

Yet while China clearly dominates the region, The Asia Pacific SVOD Forecasts report noted that there will be plenty of growth elsewhere. For example, Netflix is forecast to have 44.4 million subscribers by 2025; closely followed by Disney+, including Hotstar, with 43.6 million.”
Tweet