Amazon offers freshest films in US SVOD | Ratings/Measurement | News | Rapid TV News
By continuing to use this site you consent to the use of cookies on your device as described in our privacy policy unless you have disabled them. You can change your cookie settings at any time but parts of our site will not function correctly without them. [Close]

With the online video industry enjoying a massive uptick at the moment, a survey from the Reelgood film and TV streaming search engine service has shown that Amazon Prime Video and Netflix are way out ahead of the pack when it comes to the amount of new content consumers get from subscription video-on-demand (SVOD) services. 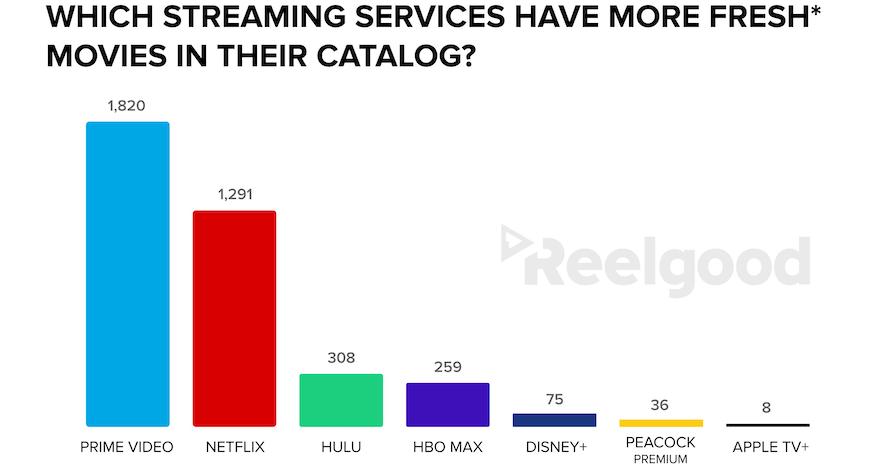 In its analysis of the seven leading SVOD platforms operating in the US, Reelgood defined 'fresh' as any film that was released between 2018 and 2020, while a TV show is considered 'fresh' if new episodes were released within that same time period.

Taking a snapshot of the situation as of 20 August 2020, the study found that Amazon Prime Video had 1,820 fresh films in its catalogue, followed by Netflix on 1,291. Some way behind was the Hulu over-the-top (OTT) service with 308 and then the recently launched direct-to-consumer services, namely HBO Max with 259; Disney+ (75); Peacock Premium (36); and Apple TV+ with just eight films.

Analysing the results, Reelgood noted that it made sense for Netflix and Prime Video to be leading the pack, the former because of what it called a “never-ending” stream of original series, and Prime Video because of its “famously massive movie library. The films did say that it was surprised to see Hulu come second to Netflix in TV despite having almost 500 fewer shows than Prime Video.

Despite the low ranking on both scales for Apple TV+, Reelgood noted that the service, which was introduced only in November 2019, came in last due to its limited catalogue but that it was worth noting that it was the only candidate in the line-up where the library was made up of all original content.