Comedy Dynamics rocks up on Roku | Programming | News | Rapid TV News
By continuing to use this site you consent to the use of cookies on your device as described in our privacy policy unless you have disabled them. You can change your cookie settings at any time but parts of our site will not function correctly without them. [Close]

Comedy Dynamics rocks up on Roku

Bringing free 24/7 access to a range of content across the genre for the online video platform’s users, Comedy Dynamics has officially launched its comedy app on Roku, showcasing a library of comedy. 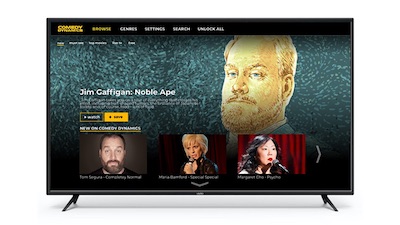 Founded in 2008, Comedy Dynamics has emerged as the largest independent producer and distributor of stand-up comedy content in the US and is home to the largest indie comedy audio catalogue, including multiple Grammy Award nominated specials. Owners of VIZIO SmartCast TVs can enjoy Comedy Dynamics’ range of specials, both classic and modern.

With the app, Roku users can enjoy what is described as “an almost endless” supply of stand-up comedy specials curated by the Comedy Dynamics team.

“We have a saying here that ‘we are where you are’. I believe this partnership with Roku is a huge step forward to fulfilling that commitment,” said Brian Volk-Weiss, CEO of Comedy Dynamics.