Bitmax brings acclaimed doc through PVOD | VOD | News | Rapid TV News
By continuing to use this site you consent to the use of cookies on your device as described in our privacy policy unless you have disabled them. You can change your cookie settings at any time but parts of our site will not function correctly without them. [Close]

In what is an increasing trend in the days of Covid-19-hit distribution chains, Digital media management and licensing company Bitmax is making available cult-hit Fantastic Fungi to major digital distribution platforms as a premium video-on-demand (PVOD) release. 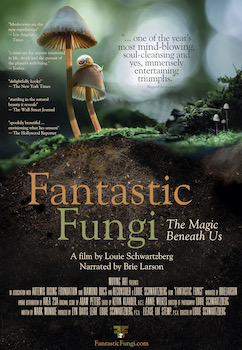 Fantastic Fungi, directed by Louie Schwartzberg and narrated by Brie Larson, is an immersive journey through time into the underground network of the fungi kingdom. Through the eyes of renowned scientists and mycologists, the film illustrates how the beauty and intelligence of fungi can offer solutions to some of the world’s pressing medical, therapeutic and environmental challenges. The film achieved a highly successful theatrical run earlier in the year with a $2.2 million box office through event based theatrical distributor, Area 23a Films and scored 100% Rating on Rotten Tomatoes.

Due to the pandemic outbreak, the theatrical campaign was forced to quickly transition from in-theatre to virtual screenings. The film will now be available on Apple TV in August 2020 in English, Spanish, French, Dutch, and German. Google Play, Amazon and Vudu will be added in September to celebrate National Mushroom Month.

Audiences will also be able to enjoy a digital extras package, created by Bitmax, that will be included with the film containing bonus material and behind the scene footage. “In these extraordinary times we need content that speaks to who we are and how we might make the world a better place and as all the critics and fans agree, said Bitmax director of sales Jay Friedman. “Louie Schwartzberg has done that. We're thrilled to reach new audiences who can enjoy this stunning and timely work across all the major digital outlets.”
Tweet