41 Entertainment announces new content partners for S.M.A.S.H! | Deals | News | Rapid TV News
By continuing to use this site you consent to the use of cookies on your device as described in our privacy policy unless you have disabled them. You can change your cookie settings at any time but parts of our site will not function correctly without them. [Close] 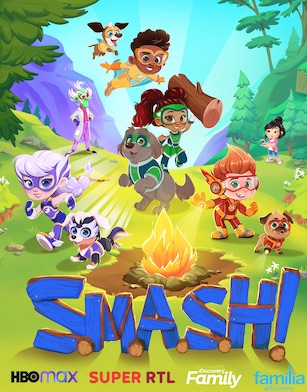 The 52 x 11’ series features four amazing kids with superpowers – Streak (St Petersburg), Rocket (Cape Town), Flare (Glasgow) and Vitória (São Paulo) –preparing to become the next generation of superheroes. And their super-powered dogs – Felicity, Lightning, Blaze and Rio – are training to fulfil their destinies as superhero sidekicks. At the centre of this super heroic action team is Mei Lien, a clever and charismatic mechanical genius from Guangzhou, China. Mei Lien is the Camp S.M.A.S.H! equivalent of James Bond’s “Q”, and even though she doesn’t have superpowers, this Super Camper is super smart, and she’s constantly inventing customised vehicles and accessories for her teammates – often with the help of her mechanical pet, a puppy-like AI named Ping.

Created by Allen Bohbot based on an original idea by Kaaren Lee Brown, S.M.A.S.H! is an exclusive property of global animation company 41 Entertainment and comes from the same creative and production team as the international hit Super Monsters. It was developed for TV by Kaaren Lee Brown and Kiersten Halstead, illustrated by Mel Bontrager, and executive produced by Allen Bohbot.

“We have built a great team of writers to bring the S.M.A.S.H!™ adventures to life…We are also fortunate to have a fantastic production team to build out the Camp S.M.A.S.H! world,” said Halstead. “Each episode focuses on fun and engaging superhero adventures that require teamwork, problem solving, and a sense of humour.”