Amazon Prime crowned king of UK original streaming programming | Ratings/Measurement | News | Rapid TV News
By continuing to use this site you consent to the use of cookies on your device as described in our privacy policy unless you have disabled them. You can change your cookie settings at any time but parts of our site will not function correctly without them. [Close]

Even though arch-rival Netflix has the better offering according to audience ratings, research conducted by Cable.co.uk has found that Amazon Prime has the best original programming of the streaming services available in the UK according to IMDB. 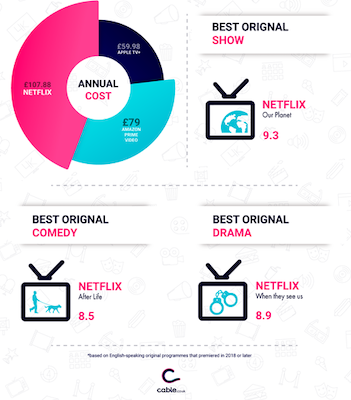 Using leading TV and film online database IMDB, the UK broadband and mobile comparison site looked at the original programming of the streaming sites since 2018, analysing the average IMDB score of all English-speaking shows, as well as the average ratings from film and television review-aggregation website Rotten Tomatoes. Only English-speaking original programmes from the past two years were looked at, and did not include co-produced series, such as The Last Dance. 204 Netflix shows, 39 Amazon Prime shows and 20 Apple TV+ shows were analysed for the study.

Overall, in the past two years, Amazon Prime had the highest-rated original shows according to IMDB, scoring a 7.49 out of 10 on average. Comparatively, the average rating for Netflix originals was 7.11.

When looking at Rotten Tomatoes’ average audience score however, Netflix’s original shows scored a higher rating than Amazon Primes: 79.74% compared to 76.47%. Disney+ and Apple TV+ were also looked at as part of the study, but were discounted from the ranking because of the low number of original shows, or the low number of ratings. Incidentally, Apple TV+ originals had an average IMDB score of 7.13 and Rotten Tomatoes score of 83.8%, while Disney+ had an IMDB rating of 7.6 for its own programming.

The highest-rated original programme in the past two years belonged to Netflix, with David Attenborough’s Our Planet scoring an impressive 9.3 out of 10. This was closely followed by Amazon Prime’s documentary Harmony with A.R. Rahman, which is rated 9.2.

Looking at average costs of subscriptions, the annual cost of a Netflix subscription for its standard tariff worked out at £107.88 per year, compared with Amazon Prime Video’s cost of £79. However, broken down to what that means in terms of the amount of original programming per year – for Netflix it’s £1.42 per original show, and £5.27 for each original Amazon Prime Video series.

“Streaming services have never had it as good as they have in the past few months, with record figures seen across the board, resulting in a need for good broadband to stave away dreaded buffering,” said Dan Howdle, consumer telecoms analyst at Cable.co.uk commenting on the research. “Indeed, the popularity was such that streaming providers had to lower their streaming quality to reduce the strain on internet service providers. However, the big question of ‘which has the best original programmes’ still remains up for debate.”