Disney+ adds to second quarter surge for mobile app usage | Mobile | News | Rapid TV News
By continuing to use this site you consent to the use of cookies on your device as described in our privacy policy unless you have disabled them. You can change your cookie settings at any time but parts of our site will not function correctly without them. [Close] 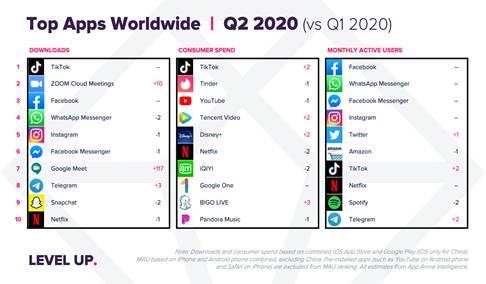 The Q2 Index findings state bluntly that people are leaning on mobile now more than ever during this difficult time, with April 2020 seeing a monthly all-time high of over 200 billion hours spent in mobile apps worldwide. With the average user spending 4 hours and 20 minutes per day on smartphones, App Annie noted that it was more important than ever for brands to have a strategy in place to help them win on mobile.

In all, consumers were found to have downloaded over 35 billion new apps in Q2 2020 with Google Play downloads up 10% year over year to 25 billion, while iOS downloads grew 20% year-on-year to nearly 10 billion new downloads for the quarter. On Google Play, non-gaming apps accounted for 55% of all downloads, while on iOS the figure was slightly higher at 70%.

The photo and video categories saw strong quarter-over-quarter growth, with consumer spend up by 25% from Q1 2020. TikTok’s continued rise in 2020 was a key driver of this, securing the place for top grossing app on the iOS App Store globally in Q2 2020 in the App Annie research.