US OTT churn rate hits 41% in Q1 2020 | Media Analysis | Business
By continuing to use this site you consent to the use of cookies on your device as described in our privacy policy unless you have disabled them. You can change your cookie settings at any time but parts of our site will not function correctly without them. [Close]

Even though during the Covid-19 crisis, more than two in five US broadband households have trialled an over-the-top service, and 8% of households have tested four or more, research from Parks Associates has found the churn rate for OTT has increased from 35% in Q1 2019 to 41% in Q1 2020. 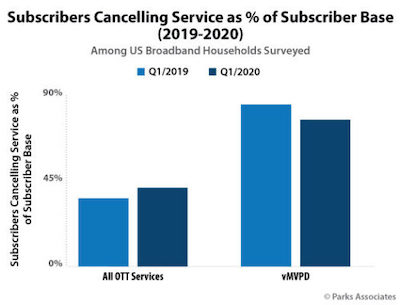 Among the new subscribers, 49% took to Disney+ and 27% subscribed to Apple TV+, so conditions created by the crisis helped these services quickly increase their subscriber base. Yet Parks suggested that a key question going forward is whether subscribers will keep these services as fewer households shelter-in-place. It added that a significant challenge, especially for services relying on original programming, was delivering new content since production on many series has halted.

“Major players like AT&T for Warner Brothers and Comcast for Universal Studios are greatly concerned about the delays in content production on the launches of new services, like HBO Max and Peacock. Free trials will bring in new subscribers at the launch, and roughly seven in ten have subscribed to at least one OTT service they have trialled. OTT services need to be creative in building an engaging service, but during this time of heavy video consumption, OTT services have the opportunity like never before to win over new video consumers and retain them as long-term subscribers.”