Mobile operators set to generate 170MN million SVOD subs over next five years | VOD | News | Rapid TV News
By continuing to use this site you consent to the use of cookies on your device as described in our privacy policy unless you have disabled them. You can change your cookie settings at any time but parts of our site will not function correctly without them. [Close]

In a clear indication of the growing importance of the mobile platform in the TV and video arena, Digital TV Research is forecasting that smartphone gross SVOD subscriptions double between 2019 and 2025 to 170 million. 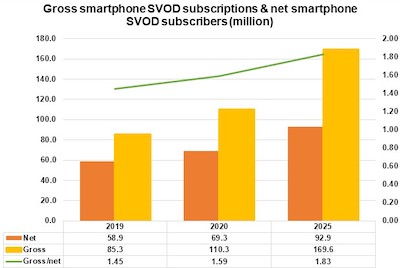 The research found that the net smartphone SVOD subscriber count will rise by 34 million between 2019 and 2025 to reach 93 million – lower growth than gross subscriptions. The total will climb by 25 million in 2020 alone.

Whilst noting that the numbers revealed in the Smartphone SVOD Forecasts report were strong, Simon Murray, principal analyst at Digital TV Research noted that the forecast “could easily” more than double if direct mobile SVOD subscriptions were included.
Tweet