Netflix sees 60% surge in Twitter influencer discussions | Social TV | News | Rapid TV News
By continuing to use this site you consent to the use of cookies on your device as described in our privacy policy unless you have disabled them. You can change your cookie settings at any time but parts of our site will not function correctly without them. [Close]

Netflix has enjoyed a massive uptake over the last three months of global lockdowns and research has emerged from GlobalData showing just how much the leading subscription video-on-demand service has been given a boost from social media channels. 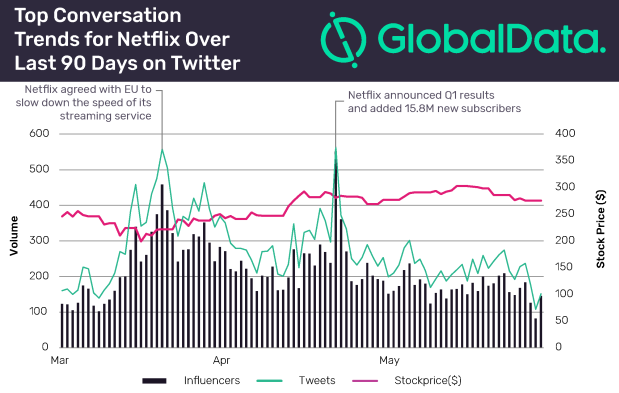 In April the company announced that it had racked up 15.77 million new subscribers in the first quarter of 2020, and now the analysis from the data and analytics company has shown that influencer discussions related to Netflix spiked more than 60% during March-May 2020, over the previous 90 days.

Influencer conversations in April 2020 rocketed when Netflix announced that it added an eye-popping due to home restrictions and reported quarterly revenue of US$5.77 billion against the estimated US$5.76 billion. In addition to this, the Covid-19 crisis has a positive impact on the company’s stock price as it is up by almost 14% since the beginning of 2020. This followed another Twitter spike in March when the company announced that it agreed with EU in a deal to slow down the speed of its streaming service for 30 days to reduce traffic across Europe by 25% and ensure that broadband networks perform adequately as millions of people confined to their homes.

“Due to Covid-19, people are streaming more content online as they spend more time at home, bringing companies like Netflix to a bright spot in the entertainment sector, with significant growth in new subscribers and higher viewing time,” commented Prashant Saxena, influencer expert at GlobalData. “As the world starts easing lockdown restrictions and slowly reopening restaurants and other recreational destinations, it is expected that the viewership and membership numbers for Netflix will likely be impacted in the next coming months.”
Tweet