Thinkbox enhances Demand Generator | Ad Tech | News | Rapid TV News
By continuing to use this site you consent to the use of cookies on your device as described in our privacy policy unless you have disabled them. You can change your cookie settings at any time but parts of our site will not function correctly without them. [Close]

Thinkbox, the trade association for commercial broadcasters within the UK, has announced new functionality within its Demand Generator optimisation tool to offer users greater flexibility to tailor its output. 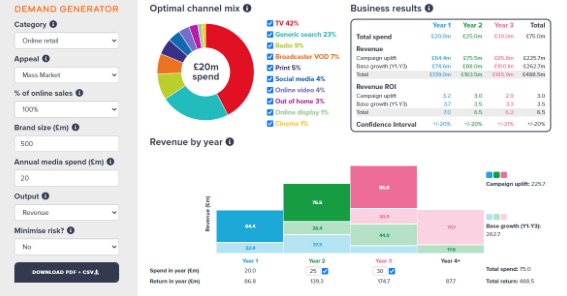 Released in November 2019, the Demand Generator is designed to enable marketers to determine the optimal advertising media mix specific to their business and its objectives. It is designed as a starting point for brands that don’t already do econometric analyses of their media performance.

These were determined by the findings of the Demand Generation study, by Gain Theory, MediaCom and Wavemaker, an econometric analysis of £1.4 billion of media spend by 50 brands across ten forms of advertising over three years. It found that some forms of advertising are much riskier than others and that, although most channels boost the efficiency of others, the scale and consistency of the effect differs significantly.

As well as determining an optimal media mix, it forecasts the likely business results of following its guidance, both in terms of incremental revenue/profit per year and revenue/profit return on investment (ROI). Since launch it has been used over six thousand times by agencies and advertisers from 77 countries.

Thinkbox says that the uncertainty caused by the Covid-19 pandemic makes smart media planning more important than ever. The new version has enhancements in four key areas: the ability to deselect advertising channels from the optimisation; an option to choose different media spend budgets in years two and three; detail on how effects accumulate over three years; a new data download format.

Previously, once all the variables have been inputted, the media spend is optimised across 10 advertising channels. Following the update, users now have the option to deselect channels from the optimisation and the media spend will be recalculated and optimised across the remaining channels and the revised estimate of return on investment displayed. In addition while previously, there was only the option to look at the revenue/profit/ROI effect of repeating year one’s spend in the subsequent two years, users can now input different figures and run various ‘what if’ scenarios to see what impact that has on the outcome.

Effects are broken down by campaign uplift such as short-term effects and base growth effects, like long-term effects. It will also have an improved graphic (i.e. chart) for how these effects build over time and as well as PDF, report data will now also be available to download in csv.

Noting what he thought the new Demand Generator could produce, Matt Hill, research and planning director of Thinkbox said: “The Demand Generator has seen fantastic take-up since launch. It seems to be filling a genuine gap in the market for those brands that don’t already do econometric analysis. Following its successful launch and welcome feedback from early users, we’re delighted to now build in greater flexibility and hopefully make it even more useful. In the current climate, with so much uncertainty, having a tool like this that offers such a well-informed place to start from is vital.”