US OTT viewing time set to rise 23% for 2020 | Ratings/Measurement | News | Rapid TV News
By continuing to use this site you consent to the use of cookies on your device as described in our privacy policy unless you have disabled them. You can change your cookie settings at any time but parts of our site will not function correctly without them. [Close]

In a further clear indication of the surge in viewing of online video during lockdown in the country, research from eMarketer is calculating that the average viewing time spent with subscription over-the-top (OTT) video content in the US will surpass 62 minutes per day this year, up 23.0% year-on-year. 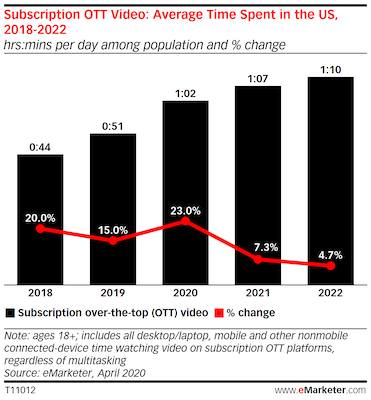 The survey was conducted on 31 March and is said to resemble the US population on the criteria of gender, age, income, and living area. Most of the consumers were likely to replace traditional TV with digital video, leading to more time consuming subscription OTT content.

Looking at what was driving the spike in viewing time, which compares with a 15% increase in 2019, eMarketer said that there were three principal trends: new services with huge content libraries; stay-at-home orders; cord-cutting driving OTT.

In terms of the former, the analyst noted that the new streaming platforms have launched with an abundance of premium content, fuelling increased consumption, with the media giants of Disney, NBC and HBO Max (WarnerMedia) bringing what it said was ‘huge’ content libraries to subscription OTT. At the same time, Apple TV+ and Quibi have also poured money into original content.

Stay-at-home orders due to the Covid-19 pandemic have also accelerated growth in time spent with existing streaming platforms. The study observed that the average time spent with Netflix will surpass 30 minutes per day in the US in 2020, up more than 16% from the year before. Amazon Prime Video, the third most-popular streaming platform after Netflix and Hulu, is projected to see a 19.1% increase this year to nearly 9 minutes per day.

The cancellation of live sports due to Covid-19, as well as growing unemployment, is likely to cause some consumers to cancel their cable subscriptions and eMarketer says that as s cord-cutting speeds up, more video consumption will shift to subscription OTT content. Nearly a tenth of respondents to the survey said they had already cancelled or were planning to cancel their pay-TV subscription due to the pandemic.

Looking to the foreseeable future, eMarketer forecast that subscription streaming would remain the most popular way of consuming digital video for the foreseeable future. By the end of its forecast period, eMarketer calculated time spent would reach 70 minutes a day. That would represent almost 54% of daily time spent with digital video, which will average 130 minutes per day in total.

While it saw room for incremental growth after 2022, eMarketer did caution that daily time spent with digital video would likely eventually approach a ceiling and it did not expect any new-to-market subscription OTT services to boost time spent. Instead, the analyst said that they would have to edge out existing services.