US TV viewing normalises but connected TV remains above pre-Covid-19 levels | Ratings/Measurement | News | Rapid TV News
By continuing to use this site you consent to the use of cookies on your device as described in our privacy policy unless you have disabled them. You can change your cookie settings at any time but parts of our site will not function correctly without them. [Close]

With stay-at-home directives orders across the country being eased, traditional TV viewing is returning to normal patterns in the US but connected TV (CTV), which grew sharply during the lockdown, remains well above pre-Covid-19 levels says research from Nielsen. 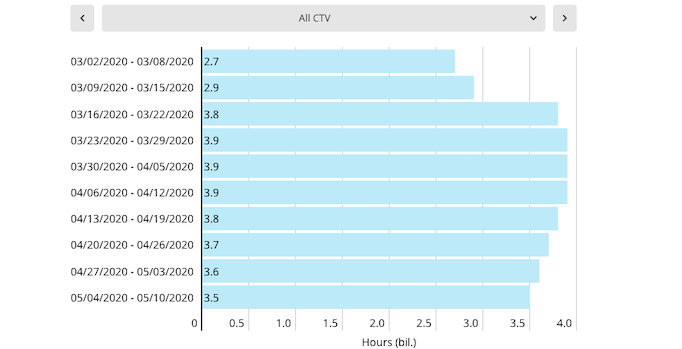 Data from the research firm has shown that weekly time spent watching connected TVs grew along with overall media use in the early days of the Covid-19 pandemic, rising by more than a billion hours as the weeks passed. The analyst says that while the rise in total media consumption during shelter-in-place restrictions was expected, the persistent high levels of CTV use across smart TVs, internet-connected devices and game consoles suggests that life in the new normal includes a heavier dose of connected TV use than before the lockdowns.

Nielsen noted that CTV offers consumers an array of content options, ranging from streaming apps to gaming and OTT channels and that such a variety is a critical element behind the increased usage. And while streaming video was currently dominating the media landscape, it was important to note that more than 60% of the subscription video-on-demand (SVOD) minutes viewed are attributed to acquired content rather than original programming from the streaming companies.

The analysis revealed that with such a variety of options, CTV usage remains high, while traditional live TV usage in early May was only marginally higher than it was in 2019. That said the analyst spoke to the massive attraction that connected media offers—even when consumers have the freedom to go outside.

Nielsen stressed that high CTV access and usage was not unique to the current health crisis: indeed it pointed out that trends have been headed upward for some time. In March 2020, Nielsen data showed that 76% of US homes had at least one connected device. However, such access does not always equate to usage, and the company tracked in January that consumers in those homes were using CTV devices for 12.5 billion hours each month.

By the week beginning 30 March 2020, shortly after cases of Covid-19 began to surface in the US and quarantined living began, total hours spent with CTV devices was up 81% year-on-year. That increase equated to nearly four billion hours of CTV use per week.

The study also found a growth of co-viewing as consumers choose to watch content together—especially during a global pandemic, which has likely provoked consumers to lean into their families and loved ones during the health crisis. In fact, Nielsen data shows that the current circumstances inspired increased co-viewing between the week beginning 2 March 2 and the week of May 4. While co-viewing levels have come down from their peaks during the week beginning 23 March, they remained higher than before the Covid-19 pandemic for most demographics. But in the new normal, Nielsen concluded that connected TV and co-viewing were now a large part of the new media consumption equation.