Synamedia unveils research to define fans by attitudes to sports piracy | Security | News | Rapid TV News
By continuing to use this site you consent to the use of cookies on your device as described in our privacy policy unless you have disabled them. You can change your cookie settings at any time but parts of our site will not function correctly without them. [Close]

In what it says is the first global study of its kind, video software provider Synamedia has unveiled a series of reports designed to broaden understanding of global sports piracy in order to protect the value of sports rights. 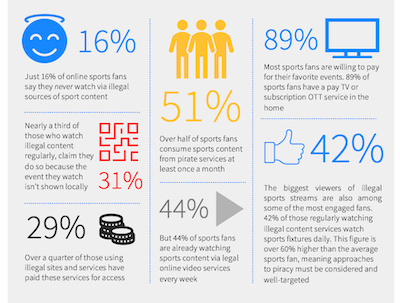 The Charting Global Sports Piracy report draws on results from a 10-country study of over 6,000 sports fans conducted by Ampere Analysis. Notably the report segments sports fans for the first time based on their attitudes to, and consumption of, pirate sports content. Synamedia says that for operators and rights holders, understanding these nuances provides a springboard from which to reduce the appeal of illegal content and encourage greater uptake of legitimate services. A detailed assessment of different approaches to combatting sports piracy will be covered in subsequent reports.

Overall, the study found that, while 89% of sports fans have a pay-TV or subscription OTT service, over half (51%) still watch pirate sports services at least once a month. More worryingly, of those who regularly view illegal sports content, 42% watch sports fixtures on a daily basis. This is said to be over 60% higher than the average sports fan. This suggests there is a considerable opportunity for operators to drive incremental revenues with targeted sports offerings.

Loyal stalwarts made up 26% of respondents and were found to live disproportionately in football-focussed nations and were big viewers of pay-TV sport. Almost all believe it’s wrong to watch pirate sports content yet more than a third (35%) still do it at least weekly. They are be prepared to top up their sports subscriptions if they could legitimately access all the content they want to watch on any device - both at home and on the move.

Fickle Superfans (31%) live mainly in developing markets, and have a huge appetite for a wide range of national and international sports and all consume pirate sports content, with 89% doing so at least weekly. They might pay more for legitimate sports services if they could access more flexible packages, a broader range of sports, or multiscreen services with frictionless onboarding and flexible terms.

Casual spectators don’t follow league sports but watching major sporting events such as the Olympic Games, the Superbowl and tennis grand slams. The least likely group to pay for a legitimate sports TV subscription, almost a fifth (17%) say they watch illegal content at least weekly - despite their lower levels of interest relative to the other segments. They are likely to be lured away from pirate streams by "light" access to tournaments, flexible payment models, and pay-to-play access to big events.

Synamedia believes analysis of the attitudes and behaviour of viewers within each cluster holds the key to a renewed anti-piracy drive. It adds that an important element in the fight-back is the adoption of flexible solutions and services that offer the freedom to target specific clusters of fans with an appealing mix of access and payment models, as well as disrupting pirates’ ecosystems.

“Global spend on TV sports rights is set to total almost $50 billion in 2020. Protecting these revenues and keeping sports on screens requires a deeper understanding of the evolving piracy landscape and a cogent response,” explained Simon Brydon, senior director, sports rights anti-piracy at Synamedia. “This initial research into what motivates sports fans to access illegal streams establishes a baseline for a more nuanced and targeted approach to combatting piracy. Our ambition is to help sports rights holders and operators apply a more forensic approach that drives up legitimate revenues, reduces sports’ fans reliance on illegal streams and takes the wind out of the pirates’ sails.”