Pay-TV revenues to continue to plunge over the next five years | Media Analysis | Business | News | Rapid TV News
By continuing to use this site you consent to the use of cookies on your device as described in our privacy policy unless you have disabled them. You can change your cookie settings at any time but parts of our site will not function correctly without them. [Close]

A study from Digital TV Research has made the worrying prediction that pay-TV revenues in the leading TV markets are set to follow their current sharp downward spiral and will total to $150 billion in 2025, a fall of $52 billion since peaking in 2016. 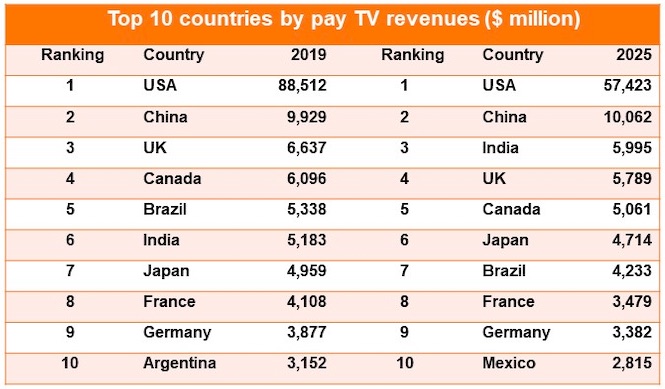 The analyst attributes much of the losses to subscribers converting from standalone TV to a bundle where they pay more overall to the operator but less on TV services. Cord-cutting is also a major problem, especially in the US which says the research will likely have the most dramatic fall, $31 billion, in the years to 2025. Brazil and Canada are projected to will each lose more than $1 billion.

In an important caveat to the projections, Digital TV Research said that the Global Pay TV Revenue Forecasts report assumes that professional sports will restart in August 2020 following the relaxation of Covid-19 lockdowns. If this does not happen, the analyst warns that pay-TV will experience considerable churn.