Streaming service providers’ ad spend up 87% year-on-year | Ad Tech | News | Rapid TV News
By continuing to use this site you consent to the use of cookies on your device as described in our privacy policy unless you have disabled them. You can change your cookie settings at any time but parts of our site will not function correctly without them. [Close]

Ahead of the launch of HBO Max, which is said to have tripled its ad spend ahead of launch, streaming providers’ ad spend has more than tripled since the week beginning 10 May 2020 says research from advertising intelligence and sales enablement platform provider MediaRadar. 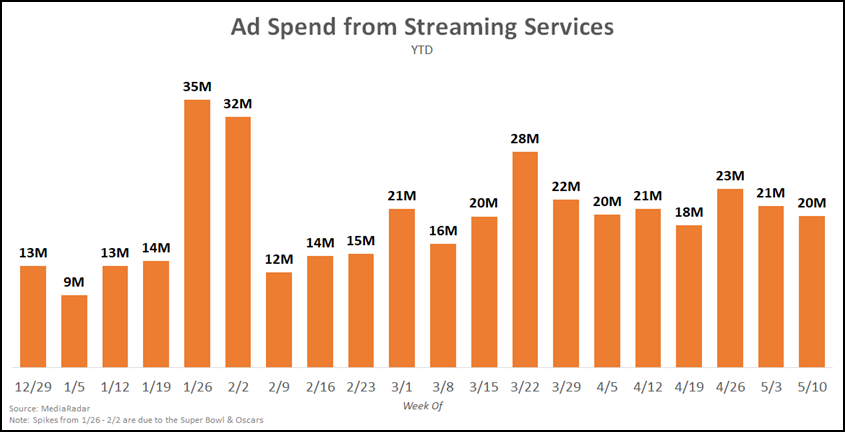 This represents an 87% rise on an annual basis as says the research streaming services, such as Netflix, Disney+, Hulu and Amazon Prime Video have increased ad spending, year-on-year (YoY), spiking 87% when comparing March 15th, 2020 - May 16th, 2020 to the same time period in 2019. Year-to-date (YTD), the top three advertisers in this category include Disney+, Hulu and the recently launched Quibi mobile video-on-demand service.

“Our study found that Netflix has not shifted advertising amid the pandemic, or in response to the launches of new competitors, such as Quibi or HBO Max,” said Todd Krizelman, co-founder and CEO of MediaRadar. “Netflix’s ad spend in the month of April (2020) was actually down 11%, YoY. It’s also worth noting that Spring and Summer are usually quieter months for Netflix. For the last two years (2018 & 2019), their advertising has peaked in Q4.”

Disney upped spending for both Disney+ and Hulu amid the pandemic and comparing the average weekly spend before after 15 March, their spend increased 74%, excluding their Oscars ads.Amazon Prime Video also upped its ad spending, from the week of 10 May 2020, nearly doubling where it was just a couple weeks before, according to the study. Looking at the period of 15 March to 16 May 2020, spending from Amazon to promote their streaming offering was up 29%, YoY.

MediaRadar’s analysis found that HBO Max began advertising the week of 19 April 2020 and that ad spend from HBO Max more than tripled the week of 10 May 2020, when compared to the week prior. “So far, HBO Max is using a mixture of digital and TV advertisements. Digitally, the brand has also been active on Snapchat, as well as major sites like Yahoo!, IMDB, Forbes, etc,” added Krizelman. “On TV, HBO Max is being promoted heavily across other Time Warner properties, with ads running on CNN, TBS, Adult Swim, etc. with additional placements on other networks, like ABC and Fox.”