US viewing behaviour shifts continue as Covid-19 lockdown continues | Media Analysis | Business | News | Rapid TV News
By continuing to use this site you consent to the use of cookies on your device as described in our privacy policy unless you have disabled them. You can change your cookie settings at any time but parts of our site will not function correctly without them. [Close]

Research from Comscore has revealed that as millions of Americans adjusted to working from home and having to practice distance learning due to the Covid-19 pandemic, new engagement with streaming services and year-over-year in-home data usage surged in the beginning of May 2020. 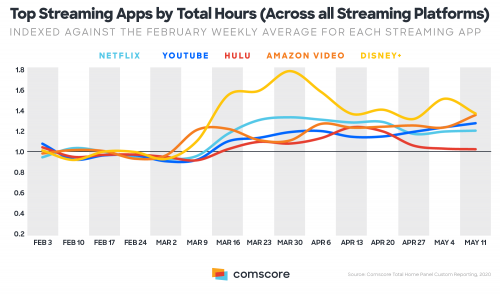 The analyst found that when it comes to viewing entertainment through devices like streaming boxes/sticks and smart TVs, the “big five” streaming services — Netflix, Amazon Prime Video, Hulu and Disney+ — accounted for the majority of total over-the-top (OTT) hours streamed in US homes, upwards of 80%. Over the last two months, Comscore says that it has seen growth in share of streaming hours through the week beginning 11 May compared with that of 3 February.

Even though Disney+ currently has a smaller share of streaming hours among the five leading providers, it is nearly two times larger than the next video-oriented OTT app offering in terms of streaming hours. The House of Mouse direct-to-consumer service grew during the pandemic when looking at growth relative to its previous share. Comscore suggested that some of the growth was likely related to content released to the streaming platform, such as the straight-to-VOD release of the film Onward which landed on Disney+ on 3 April 2020.

Interestingly, and perhaps a predictor of future trends, the Comscore research also found that In-home data usage remained strong through the week beginning 20 April 2020 but began to decline in recent weeks, possibly due to some states easing their social distancing protocols.