Covid-19 stay-at-home directives fuelling on-demand pay-TV usage | Media Analysis | Business | News | Rapid TV News
By continuing to use this site you consent to the use of cookies on your device as described in our privacy policy unless you have disabled them. You can change your cookie settings at any time but parts of our site will not function correctly without them. [Close]

Just over a fifth of broadband households with three or more children at home upgraded their internet service in April 2020, due largely to spikes in online media behaviours says research from The Diffusion Group (TDG). 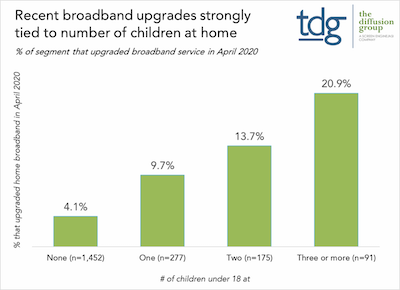 Looking at the drivers for the upgrades, those with multiple children at home were more likely to increase their use of over-the-top (OTT) SVOD services like Netflix. The findings were 61% compared with 48% among single-child and 44% among no-child households. They were also lively to have more household members using the Internet simultaneously (61% vs. 56% and 38%) and while working from home, require a faster speed of service (57% vs. 52% and 46%).

When asked if the importance of a home broadband service had changed since the Coronavirus pandemic was declared, responses were tied strongly to the number of children at home. Indeed, 56% of households without children under 18 at home said that having a broadband connection had become more important during the pandemic, 31% significantly so. This rate was much higher among single-child households (69%, 42% significantly), and even greater among households with multiple children (72%, 46% significantly).

“Each of these factors rise in significance as the number of users and time spent in-home increases,” noted Michael Greeson, TDG president and principal analyst commenting on the research.