Covid-19 to cost global entertainment $160BN over next five years | Media Analysis | Business | News | Rapid TV News
By continuing to use this site you consent to the use of cookies on your device as described in our privacy policy unless you have disabled them. You can change your cookie settings at any time but parts of our site will not function correctly without them. [Close]

Covid-19 to cost global entertainment $160BN over next five years

Becoming the latest analyst to revise its previous forecast from earlier in the year due to the Covid-19 crisis, Ampere Analysis calculates that the global entertainment sector is set to lose $160bn of growth and while the most significant impact will be felt in 2020, growth will be reduced each year until 2025. 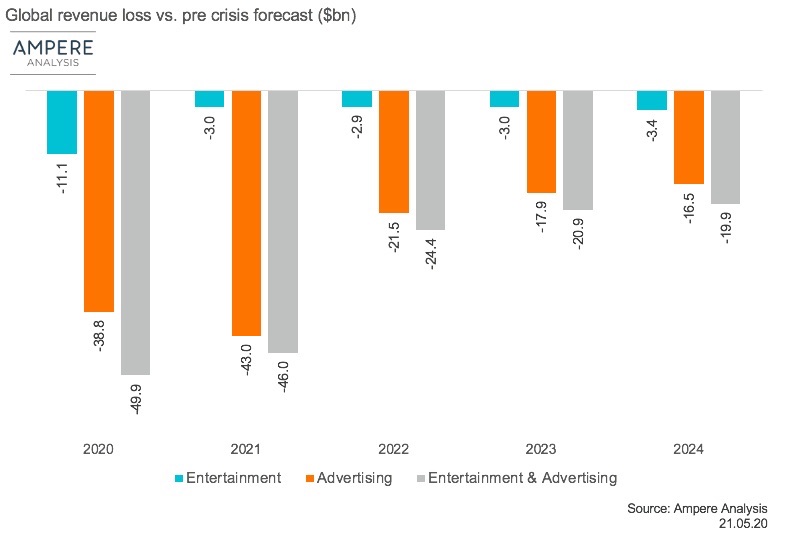 The analyst believes that there are two ways to look at the loss of value: gross revenue and relative change. It forecasted that advertising will be hit hardest both near term and overall, but drilling down into entertainment sectors revealed that areas such as theatrical will be hit proportionally harder. “The interconnected nature of the entertainment value chain means that will have a number of effects in other areas of the value chain…some of which will not be fully felt for several years to come,” noted Ampere Analysis research director Guy Bisson.

While observing that gross loss will be greatest for the advertising sector, Ampere said that it was also important to look at the relative impact pegged to the size of the sector. On that basis, theatrical will be hardest hit, set to lose $24.4 billion over the next five years, with its revenue growth down more than 11% over Ampere’s previous forecasts for the next five years.

The entertainment sector overall, excluding advertising, is set to lose a net $23bn of growth Over the five year forecast period compared with pre-Covid-19 forecasts. Yet the study also found that entertainment will be the most robust of the two sectors, losing just 1.2% of previously forecast value over the five year period. The sector will likely be helped by a boost to the streaming market which will see additional growth and counter some of the loss.

Pay-TV, which has suffered from the loss of sports coverage since the Covid-19 outbreak, is also set to lose significant value in what was already a challenging market structurally, representing around 4% of its previously forecast value.

By contrast, the big winner will be streaming. Ampere’s latest forecasts suggest streaming will gain 12% of additional growth in revenue terms over the five year forecast period as the implementation of lockdown across the world has led to a huge surge in streaming consumption and new subscriptions, benefiting subscription video-on-demand (SVOD), broadcaster video-on-demand (BVOD) and other catch-up services.

While Ampere expects to see some of these short-term gains reversed when lockdown is lifted, the shift toward on-demand viewing was already underway, so this acceleration caused by the current pandemic is a trend tha the analyst fully expects to remain after the crisis.

“Streaming services are likely to come out on top here as viewers are leaning on streaming content providers heavily, just as a slew of new platforms enter the market,” Bisson added. “Yes, there will likely be a temporary post-lockdown backlash. But key to the longer term prospects is the acceleration of consumer behavioural change which will benefit streamers.”