US sees largest first quarter multichannel subscriptions decline to-date | Media Analysis | Business
By continuing to use this site you consent to the use of cookies on your device as described in our privacy policy unless you have disabled them. You can change your cookie settings at any time but parts of our site will not function correctly without them. [Close]

Initial speculation that TV-hungry, isolated viewers would at least temporarily stem cord cutting in the US was dispelled with the industry’s largest first quarter decline for traditional multichannel subscriptions according to data from media research group Kagan. 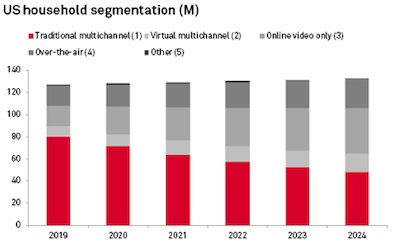 The difficult start to the year underpins Kagan’s updated forecast for video market share in the US. Taking another look at predictions that it had previously made it found that mounting unemployment and the Covid-19 economic downturn only added to the already pervasive cord-cutting forces. This said the analyst fuelled revised expectations for online-only households to surpass combined traditional and virtual multichannel subscribers in the projections.

Kagan said that the mass home isolation in the US should have stemmed multichannel defections, but adds that the “cruel irony” of the interruption in programming and ensuing economic turmoil is expected to blunt the benefits. It forecast an overall 11% drop in traditional multichannel subscriptions in 2020, and penetrations of less than 56% at the end of the year.

At two million, the fall was both the biggest absolute and relative quarterly drop to-date and the analysis added that online-only households expected to dominate growth in outlook.

Broadband-delivered services collectively lost 261,000 subs or 2.8% to finish the quarter with 9.2 million subs. Gains from Hulu with Live TV and YouTube TV were erased by the declines from Sling TV and AT&T TV Now as well as Sony’s decision to shutter PlayStation Vue in January. Subscriptions to traditional cable, direct broadcast satellite (DBS) and telecommunications (telco) video services dropped 2.4% in the quarter.

Kagan also discovered that virtual services have narrowed their cord cutter appeal and are expected to account for less than 10% of occupied households to reach nearly 11 million by year-end 2020. It believes that the upward momentum of online-only households satisfying entertainment needs solely through a combination of free and subscription streaming services is expected to accelerate to 24.7 million by the end of 2020, accounting for more than 19% of occupied households.