Animation draws on US streamers’ demands as drama takes centre stage | Ratings/Measurement | News | Rapid TV News
By continuing to use this site you consent to the use of cookies on your device as described in our privacy policy unless you have disabled them. You can change your cookie settings at any time but parts of our site will not function correctly without them. [Close]

Research by the Reelgood film and TV streaming search engine service, into what content categories are being demanded by on-demand users, has found that animation, family and cult programming have shown the highest gains in popularity among streaming users in the US. 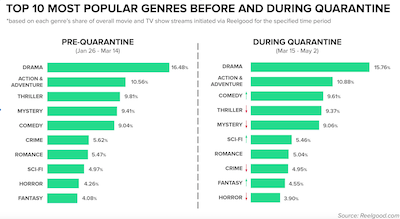 Following its April 2020 investigation of the SVOD and AVOD markets, the new survey looked at total TV show and film streams initiated vis Reelgood per genre for seven weeks prior to the US lockdown, from 26 January to 14 March, and compared that with most states from 15 March to 2 May 2020. The top-line finding was that lighter, more feel-good genres like musical and comedy saw the most increase while more intense genres like horror, war, and crime plummeted. Comedy, sci-fi and fantasy were found to be more popular now than they were pre-quarantine but mystery, thriller, horror and crime were being watched less as most people are stuck at home.

In the survey period, animation enjoyed a 21.66% increase in streaming activity, family 16.95% and Cult 15.3%. By contrast and showing that the genre was indeed not paying, Crime fell 11.80%, horror dropped 8.38% and history slid 8.01%. there was not great love for romance either: the genre’ streaming activity was down 7.95% compared with the start of the year.

Looking at each genre’s share of overall film and TV show streams initiated for the time period, Reelgood found that most genres more or less kept their respective market share from the beginning of the year. Drama was found to be the most popular currently – even though its share inched back to 15.76% - followed action and adventure (10.88%) and comedy (9.61%). Horror was the biggest loser falling from 4.26% to 3.90%, the lowest-placed genre in the research. Crime was a notable faller and is now the third least favourite genre, just ahead of fantasy.

Reelgood concluded its round-up by investigating which individual light TV programmes users were watching most of while being under lockdown. Rick and Morty was the clear winner in this regard capturing 12.69%, nearly twice as much as Feel Good (6.64%) and then Brooklyn Nine-Nine (6.18%), Schitt’s Creek (6.03%) and Community (6.02%).