On-demand use of pay-TV fuelled by Covid-19 stay-at-home directives | Media Analysis | Business | News | Rapid TV News
By continuing to use this site you consent to the use of cookies on your device as described in our privacy policy unless you have disabled them. You can change your cookie settings at any time but parts of our site will not function correctly without them. [Close]

Research from The Diffusion Group (TDG) has found that three-fifths of US adult broadband users who use pay-TV on-demand services have increased viewing as a result of Covid-19-related stay-at-home directives, with 19% reporting a significant increase. 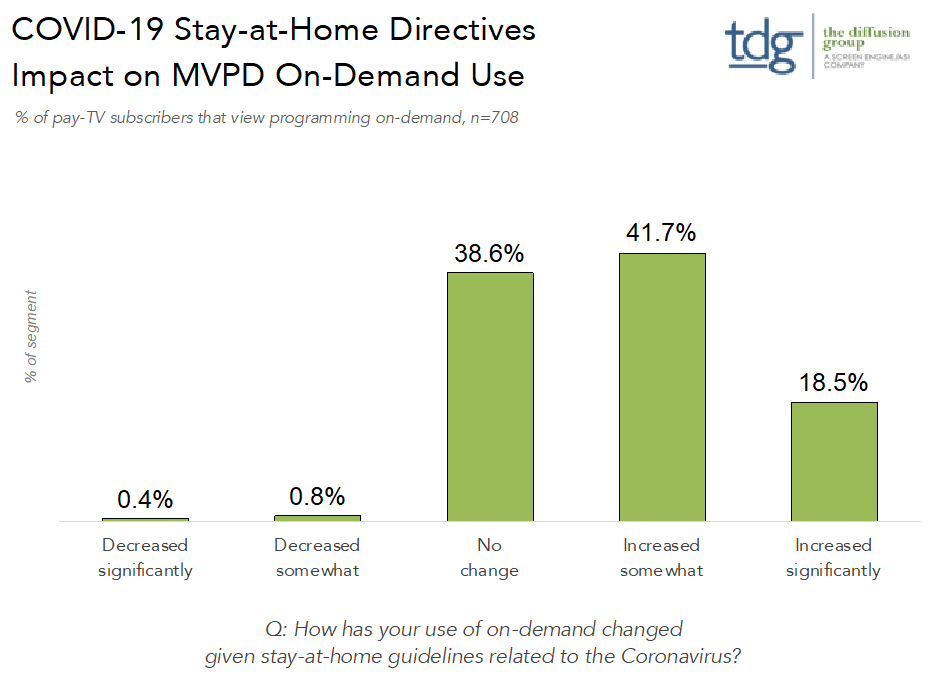 TDG surveyed 1,997 US adults with a broadband data service in the home about their TV and video behaviours. The study revealed that just over three-quarters of adult broadband users that subscribe to a pay-TV service watch shows and movies via the service’s on-demand feature; of those, 60% report spending more time watching on-demand programming as a consequence of having to stay at home due to local, state or national directives related to Covid-19.

“Much has been written about recent spikes in the use of on-demand streaming video services such as Netflix and Disney+, and for good reason,” noted Michael Greeson, TDG president and principal analyst. “Our findings clearly demonstrate that, being largely confined to their homes, consumers see tremendous value in having access to on-demand shows and movies. And this holds true for all such services, including those offered by pay-TV providers.”