Covid-19 to drive greater TVOD usage in 2020 | VOD | News | Rapid TV News
By continuing to use this site you consent to the use of cookies on your device as described in our privacy policy unless you have disabled them. You can change your cookie settings at any time but parts of our site will not function correctly without them. [Close]

Analysing the impact of the Covid-19 outbreak on new and existing video services in OTT space, research firm Parks Associates is predicting at in addition to subscription streaming services that are already booming, transactional video on-demand (TVOD) will also increase significantly in 2020. 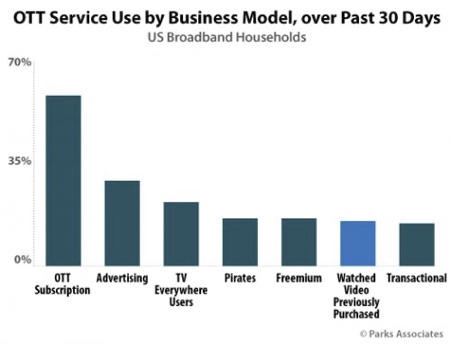 in Q1 2020, 14% of US broadband households had used a TVOD service over the past 30 days, a five-point increase from the previous year. The analyst says that the service type — which includes Amazon Prime Video, FandangoNOW, and VUDU —will spike as more content moves online, including early access to theatrical releases such as Trolls World Tour or The Invisible Man.

“The idea of streaming current in-theatre films was once a concept from a proposed streaming service called The Screening Room,” noted Steve Nason, research director, Parks Associates. “This service never officially launched, but the Covid-19 pandemic has pushed the concept behind it into reality. Many steps in content windowing were narrowing already, but the current shelter-in-place orders pushed the digital distribution of new theatrical content to the front to offset the lost revenue from closed movie theatres.”

Parks Associates also observed that Disney fast-tracked the release of blockbuster titles through its SVOD service Disney+. The company released Frozen II three months before its original planned release and added Onward to the streaming service much quicker than previously anticipated. Parks Associates added that Disney and other studios are continuing to weigh if they should release new theatrical titles straight to VOD platforms and services or push back these titles so they can premiere in cinemas as originally intended, when Covid-19 restrictions are lifted.

“By moving more prime content online earlier, studios also increase the risk of piracy for their top-dollar assets,” Nason concluded. “Early window content has always been a target among pirates, but they’ve had to sneak cameras into theatres and bootleg low-quality recordings. Now, with releases going digital, pirated video will be higher quality, while consumers might feel emboldened to tap into pirated video since theatres are closed. This will put more pressure on the antipiracy efforts among video content and service providers.”
Tweet