Western European SVOD subs soar on back of Covid-19 | VOD | News | Rapid TV News
By continuing to use this site you consent to the use of cookies on your device as described in our privacy policy unless you have disabled them. You can change your cookie settings at any time but parts of our site will not function correctly without them. [Close]

Western European SVOD subs soar on back of Covid-19

A study from Digital TV Research has found that the number of subscription video-on-demand customers in Western Europe is set to double from 88 million at the end of 2019 to 197 million by 2025. 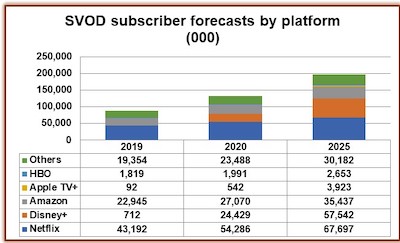 The clear key driver in this surge said the analyst will have been the many lockdowns in the region due to coronavirus and the study suggests that about 45 million subscribers will be added in 2020 alone. Yet Digital TV Research also revealed that even though lockdowns have seen a surge in SVOD subscriptions there has also been a loss in advertiser confidence, which it said will result in lower AVOD growth for 2020.

Not surprisingly, Netflix is set to remain the largest pan-regional SVOD platform, with 67.70 million paying subscribers expected by 2025. This will have meant that Netflix will add 24 million subs from 2019. The study also noted that Disney+ has made a strong and immediate impact, driven said the study by its brand recognition, low price and impressive content line-up. After launching in most Western European countries by mid-2020, Disney+ is forecast to have 57.54 million paying subscribers in Western Europe by 2025.

Commenting on the Western Europe OTT TV & Video Forecasts report, Digital TV Research principal analyst Simon Murray noted that crucial for the SVOD platforms will be retaining subscribers after the lockdown is lifted and then to attract new ones. “The danger is that subscribers will watch so much of one platform’s library during lockdown that they will unsubscribe if they feel that there is little left for them to watch,” he warned. “This will affect Disney+ less as its younger audience will watch the same content multiple times. Older audiences to the other platforms always want new content, which may be difficult to achieve especially given the production suspension during lockdown.”
Tweet