More than three-quarters of US broadband households subscribe to OTT | Media Analysis | Business
By continuing to use this site you consent to the use of cookies on your device as described in our privacy policy unless you have disabled them. You can change your cookie settings at any time but parts of our site will not function correctly without them. [Close]

More than three-quarters of US broadband households subscribe to OTT

In what represents a bump of roughly six million households over the last twelve months, 76% of US broadband households now subscribe to an OTT service says research from Parks Associates and Reelgood. 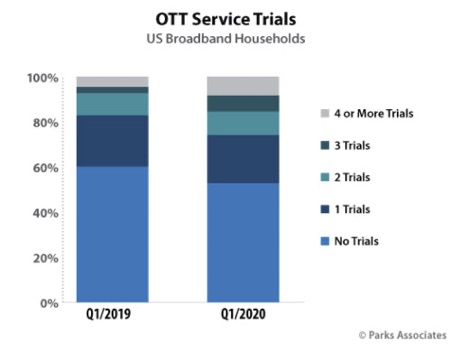 “We are closely tracking shifts in technology use at home, as shelter-in-place orders have continued as a result of Covid-19,” said Steve Nason, research director, Parks Associates. “Consumers are experimenting with watching video on different services and different devices. We anticipate a number of changes to occur, including higher consumption combined with reduced spending per month on services, which could boost ad-based services, as well as shifts in what content consumers are watching.”

In the Reelgood survey period, the most popular shows were Ozark, Money Heist and Tiger King, all from Netflix. The most popular film was Parasite. The show Doctor Foster and the film The Silver Linings Playbook had the most significant jumps in popularity from pre-Covid (17 February to 15March) to post-Covid (16 March to 26 April).

“One of the biggest shifts—and opportunities—that we’re noticing is the massive spike in children’s content available to stream,” said Reelgood head of marketing Catharine Burhenne. “The entertainment businesses who thrive during the Covid and post-Covid eras will be the ones who can cater their offerings to accommodate the huge appetite for streaming kids’ content. Tubi’s launch of its app Tubi Kids is an example of businesses capitalising on this opportunity.”