Asia-Pac set for 417MN SVOD subs by 2025 | VOD | News | Rapid TV News
By continuing to use this site you consent to the use of cookies on your device as described in our privacy policy unless you have disabled them. You can change your cookie settings at any time but parts of our site will not function correctly without them. [Close]

Despite the negative impact from the Coronavirus and the Chinese economic downturn, Asia Pacific is set to have 417 million subscription video-on-demand SVOD customers in five years’ time, up from 269 million in 2019, says a study from Digital TV Research. 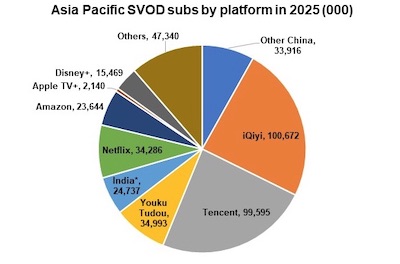 The Asia Pacific OTT TV and Video Forecasts report found that China will have 269 million SVOD subscriptions in 2025, almost two-thirds of the region’s total. India is projected to more than double its 2019 total resulting in 45 million customers.

China is expected to dominate the SVOD revenue rankings with three local companies — Tencent Video, iQIYI and Youku Tudou —are set to top the Asia Pacific SVOD subscriber rankings in 2025, with two recording 100 million subscribers. Never expected to operate as standalone platforms in China, Netflix and Amazon Prime Video will take fourth and fifth places respectively. Collectively the top five platforms are calculated to account for two-thirds of the region’s SVOD revenues by 2025.

The Asia Pacific OTT TV and Video Forecasts report predicts that overall Asia Pacific SVOD revenues will reach $18.25 billion in 2025, up by $8 billion on 2019. Netflix’s revenues are set to more than double between 2019 and 2025 to $3.19 billion. Disney+ will likely generate $1 billion in 2025, despite starting only recently. The analyst stresses that such forecasts are lower than in the analyst previous edition.
Tweet