ViacomCBS and Nexstar Media Group renew affiliation agreements | Deals | News | Rapid TV News
By continuing to use this site you consent to the use of cookies on your device as described in our privacy policy unless you have disabled them. You can change your cookie settings at any time but parts of our site will not function correctly without them. [Close]

Sealing a deal with the largest independent operator of the broadcaster’s affiliates in the US while also extending a long-term relationship, Nexstar Media Group has announced a multi-year renewal agreement with ViacomCBS for nine CBS network affiliations. 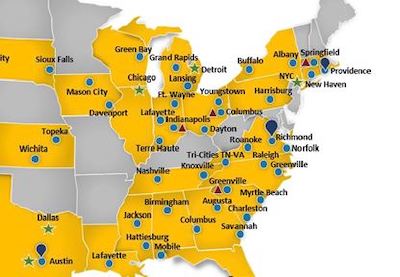 The stations reach approximately 3.5% of the US audience and nearly four million television households and extends CBS/Nexstar affiliations that were set to expire later in 2020 and covers two top-50 market affiliates, WNCN-TV in Raleigh, NC and KLAS-TV in Las Vegas, NV.

In August 2019, ViacomCBS and Nexstar completed an affiliation agreement covering 19 Nexstar stations in 15 markets, reaching approximately 5% of the US audience and nearly six million television households. The agreement announced today, coupled with the August agreement and other prior renewals, marks the long-term extension of substantially all of the ViacomCBS affiliation agreements covering 49 Nexstar television stations.

“We’re pleased to reach an early agreement with Nexstar that builds upon our long-time partnership and enables us to continue serving millions of households across the country,” said Ray Hopkins, president, US networks distribution at, ViacomCBS. “Together with Nexstar, we look forward to continue playing an important role in providing local communities with the trusted news and entertainment that audiences can rely on during these uncertain times.”

Nexstar Media Group president and CEO Perry A. Sook added: “We are delighted to extend our affiliation agreement with ViacomCBS, our largest network partner…The agreement also provides further visibility to Nexstar’s distribution revenue growth following the completion of new multi-year retransmission consent agreements in the second half of 2019 representing approximately 70% of our subscribers.”

As it was closing the deal in the US, ViacomCBS Networks Americas revealed that its global channels MTV, Nickelodeon, Nick Jr., Comedy Central and Paramount Channel were available immediately on the DIRECTV GO over-the-top (OTT) service in Mexico. The streaming platform combines live and linear television with on-demand content, including premieres, series, documentaries, movies, sports and a premium offering.