Asia-Pac pay-TV to add 45MN subs by 2025 | Media Analysis | Business
By continuing to use this site you consent to the use of cookies on your device as described in our privacy policy unless you have disabled them. You can change your cookie settings at any time but parts of our site will not function correctly without them. [Close]

Said to be the most vibrant market of its kind in the world, the pay-TV arena in the Asia-Pacific region is set to see steady growth over the next five years according to a study from Digital TV Research. 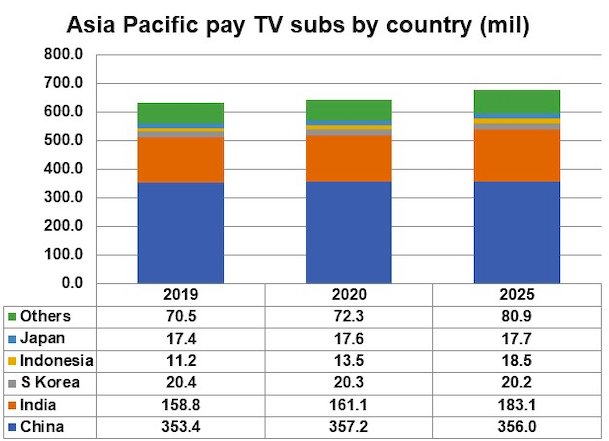 The Asia Pacific OTT TV and Video Forecasts report predicts that by 2025 the market will add 45 million subscribers, leading to revenues rising by $1.40 billion. Interestingly, the survey forecasts that pay-TV penetration will stay at around 69%.

China and India together are set to together account for 80% of the region’s 676 million pay-TV subscribers by 2025. India is set to add 24 million pay-TV subscribers over the next five years. However, Digital TV Research believes that China, where over-the-top penetration and competition will likely remain much higher in than in India, will peak in 2021 with a slow decline thereafter.

“Much of this subscriber growth is down to the number of TV households increasing by 65 million between 2019 and 2025 to 978 million as populations rise and disposable income climbs,” said Simon Murray, principal analyst at Digital TV Research, commenting on the Asia Pacific OTT TV and Video Forecasts report. “The region’s population is four billion – more than half of the world’s total.”