Disney+ to be embedded on Samsung TVs | VOD | News | Rapid TV News
By continuing to use this site you consent to the use of cookies on your device as described in our privacy policy unless you have disabled them. You can change your cookie settings at any time but parts of our site will not function correctly without them. [Close]

Disney+ to be embedded on Samsung TVs

With the official launch date of the service just two days away, Disney+ has received a fillip with the news that it will be pre-integrated within Samsung smart TVs launched from 2016 onwards, either available for download from the app store or directly pre-installed on select models. 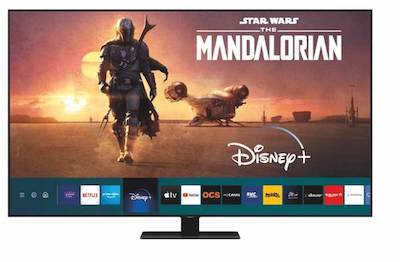 At launch in the UK, Disney+ will include content such as the includes the first seven Star Wars movies—available for the first time in this format—along with Hocus Pocus; Who Framed Roger Rabbit and Toy Story 1–3; Lady and the Tramp, a live-action re-telling of the 1955 animated classic; Noelle, an original holiday comedy film starring Anna Kendrick; High School Musical: The Musical: The Series; The World According to Jeff Goldblum docu-series from National Geographic; Marvel’s Hero Project; The Imagineering Story; short-form series Pixar IRL and Disney Family Sundays; and animated short film collections SparkShorts and Forky Asks A Question from Pixar Animation Studios.

Most importantly, the launch bundle will include The Mandalorian, the first-ever live-action Star Wars series and which has broken all download records since being part of the direct-to-service service’s initial bundle. After driving the direct-to-consumer service to an incredible first day on 12 November, then becoming the most requested series in US TV a week later, The Mandalorian became the most in-demand series in the world.

For Samsung TVs compatible with Bixby, users will be able to use their voice remote control to launch the app. In addition, customers will also be able to pause a programme on their smart TV and continue watching on their smartphone.

“With the launch of Disney+, our consumers can anticipate amazing levels of colour and brightness in 4K HDR with iconic stories of imagination and inspiration,” said Guy Kinnell, vice president, TV and AV Samsung Electronics UK commenting on the launch. “Samsung’s smart TVs will again take another leap in offering the highest quality entertainment experiences to our consumers supported by the easiest and most consumer friendly smart TV platform whilst being at the forefront of a radical shift in media consumption.”

Compatible Samsung smart TV customers will be able to sign up for a free seven-day trial directly on their connected TV device from launch on 24 March, after which they will be charged £5.99 per month or £59.99 for an annual subscription. If a customer has signed up for Disney+ on another device, they will only need to log into their account.
Tweet