Indian TV shipments reach record high of 15MN in 2019 | 4K/UltraHD | News | Rapid TV News
By continuing to use this site you consent to the use of cookies on your device as described in our privacy policy unless you have disabled them. You can change your cookie settings at any time but parts of our site will not function correctly without them. [Close]

Shipments of TVs in India have grown 15% annually to reach the highest-ever 15 million units in 2019, according to Counterpoint’s TV Tracker service. 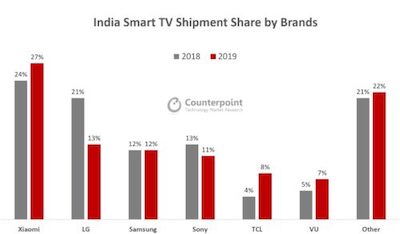 The analyst said that India was one of the largest markets in the world with more than 200 million potential TV households and that it was still under-penetrated making the country a more attractive growth market for the entire TV and content value chain.

Growth was found to be mainly driven by budget smart TVs with 32-inch TVs the leading segment and penetrating sub-US$150 price bands. The analysis highlighted that the growing number of smartphone users in India is also driving a need for Smart TV as users look to continue their streaming content consumption on the bigger screens when at home. While Samsung headed the overall TV segment, Xiaomi was the leader in the smart TV segment with 40% YoY growth in 2019.

Non-smart TV shipments grew by 7% on an annual basis by the end of 2019. While Samsung, LG, Sony were experiencing a year-on-year decrease in their non-smart TV business, the study showed that brands such as BPL and Sansui were relying on the non-smart TV segment that mainly caters to the rural market, B2B segment or a second bedroom TV in many cases.

The analyst predicted that going forward, with the popularity of OTT platforms and robust Internet connectivity, the smart TV market would continue to grow in India. It also forecast that the budget-oriented smart TV sector would dominate the market as the majority of Indians were likely to buy cheaper smart TV before making any high-value purchase decision.

Commenting on the competitive landscape and the study, Counterpoint research analyst, Debasish Jana, said: “Samsung continues to lead the overall TV market but the emerging smart TV segment is being cornered by the newer players. Smart TV was the fastest-growing segment up 25% year-on-year. The smart TV market in India was mostly driven by brands like Xiaomi, Samsung and emerging tail brands such as TCL, Vu and others, which are leveraging their growing channel presence both online and offline to target the new users and upgrade users.”
Tweet