Netflix overwhelms Amazon in original programming in 2019 | Media Analysis | Business | News | Rapid TV News
By continuing to use this site you consent to the use of cookies on your device as described in our privacy policy unless you have disabled them. You can change your cookie settings at any time but parts of our site will not function correctly without them. [Close]

A study from Omdia has pinpointed just how far Netflix has come in its ambition to become a Hollywood-style studio, launching in 2019 about nine times as much original programming as main video-streaming rival Amazon, reflecting the divergent business models of the two companies. 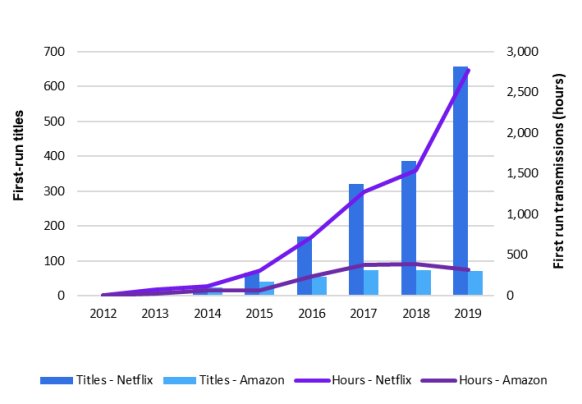 According to the Omdia Original Online Production Report – 2020, in 2019 Netflix released 2,701 hours’ worth of original programming, compared with 314 hours for Amazon Prime Video, and the SVOD leader offered a total of 657 first-run original titles in 2019, massively outstripping the 70 new titles from Amazon Prime Video. Compared with 2018, Netflix increased its hours and titles of original programming by 78% and 70% respectively in 2019. In contrast, Amazon’s hours declined by 18% and titles decreased by 5%.

“Rather than competing head-on, Netflix and Amazon are in very different businesses—as illustrated by the original programming results from 2019,” said Tim Westcott, research director, channels and programming, for Omdia.

“Netflix is a pure-play subscription streaming business that needs to fuel its continued international growth; Amazon is first and foremost a retailer, using video as an add-on to its Prime delivery business. In pursuit if its streaming strategy, Netflix is evolving into a Hollywood-style studio, building its defences against the likes of Apple and Disney+ by offering an increasing volume of original programmes.”

Looking at the types of content that was being generated, Omdia found that non-US productions were the main factor driving Netflix’s programming increase in 2019, with 1,562 hours originating overseas, up from 578 hours in 2018. The 1,139 hours of production sourced from the US in 2019 were up 20% from 2018. The analyst also revealed that for the first time, most of Netflix’s original content was produced outside the US in 2019, accounting for 58 percent of total hours. The company’s non-US originals were up 175% while non-US subscriptions increased by 24%.

“Netflix sourced a majority of its original content outside the US in 2019, but there is more to this phenomenon than simply driving international growth,” Westcott added. “Of course, local productions help to drive international growth, but Netflix is a global platform seeking content that can appeal to audiences all over the world. Non-US productions tend to be a lot cheaper, giving Netflix a more cost-effective way to address audiences in the US and across the globe.”

Emphasising the point, the Omdia Original Online Production Report noted that Netflix is primarily a global platform, so its original series are designed to appeal to worldwide audiences rather than simply delivering an upside in a local market. It cited as a key example, La Casa de Papel (Money Heist), the Spanish-language series picked up by Netflix after the first season on national terrestrial TV in Spain.