LATAM SVOD subs set to double over five years | VOD | News | Rapid TV News
By continuing to use this site you consent to the use of cookies on your device as described in our privacy policy unless you have disabled them. You can change your cookie settings at any time but parts of our site will not function correctly without them. [Close]

Despite recessions affecting most countries in the region, Latin America is projected to have 81 million SVOD customers by 2025, almost double the 42 million recorded at the end of 2019 according to a study from Digital TV Research. 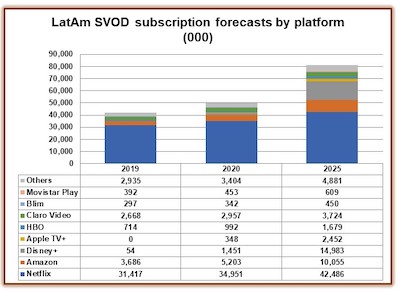 The Latin America OTT TV and Video Forecasts report found that five US-based platforms — Netflix, Amazon Prime Video, Disney+, Apple TV+ and HBO — are likely to account for 88% of the region’s paying SVOD subscriptions by end-2025. This proportion was already as high as 85% in 2019 despite Disney+ and Apple TV+ not yet coming into operation.

The study found that a key dynamic will be that the major US-based players will grow but the local platforms will stall. The analyst noted that Claro Video was often available free to its top spending mobile subscribers while Telefónica/Movistar may sell its remaining non-Brazilian assets.

By contrast, the report predicts that even though market leader Netflix will continue to grow, its dominance on markets will actually decline. The Latin America OTT TV and Video Forecasts study calculates that Netflix will command 52% of subscription video-on-demand by 2025, down from 75% in 2019 despite adding 11 million subscribers over this period.
Tweet