UK metro areas see average mobile speeds rise | Mobile | News | Rapid TV News
By continuing to use this site you consent to the use of cookies on your device as described in our privacy policy unless you have disabled them. You can change your cookie settings at any time but parts of our site will not function correctly without them. [Close]

5G may be right now capturing all of the headlines regarding the mobile industry but 4G network performance is improving rapidly across the major UK metropolitan areas according to research from RootMetrics. 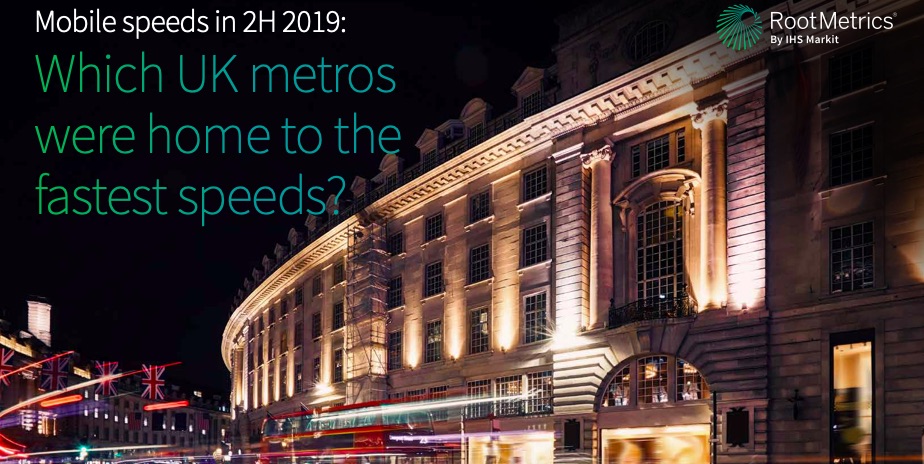 The report noted that with 5G services in the UK still expanding, most mobile users continue to rely on 4G LTE networks to provide the fast speeds that power their daily connected experience. To determine which of the 16 metropolitan areas across the UK was home to the fastest and slowest speeds, the analyst aggregated the median download speeds recorded on the networks of EE, O2, Three and Vodafone in the locations.

RootMetrics said that the good news was that results from its testing in the second half of 2019 showed that the UK operators were providing generally fast speeds in most metros across the UK, and speeds should get even faster as 5G takes hold in more cities. The tests were based on Samsung Galaxy S9 4G LTE smartphones purchased from operator stores, and tests were conducted during the day and night while walking and driving.

Putting this into context regarding real-world usage, RootMetrics noted that while all the speeds of all operators in Birmingham were fast enough for most user data activities, consumers would notice a clear difference between the speeds of EE and Vodafone and those of O2 and Three. At EE’s median download speed of 51.6 Mbps, for example, downloading a 600 MB Netflix film would take less than two minutes; on the networks of O2 or Three, downloading the same film packet would take between five and eight minutes.

Liverpool had a media average of 28.8 Mbps. RootMetrics said that while Liverpool’s speed was basically identical to Birmingham, the important thing was that both metros had fast speeds with the same operators leading the pack. EE and Vodafone each racked up strong median download speeds of roughly 40 Mbps, while O2 and Three had speeds of 11.3 Mbps and 17.7 Mbps, respectively.

The RootMetrics survey also noted that 5G could ultimately change the game for users looking for fast data connectivity, and that it had already begun its first-half 2020 testing in UK metros, and those results will include 5G where available. It expects to see faster aggregate median download speeds and stronger performance in general as 5G continues to expand across the UK.