US to add 108 million SVOD subscriptions | VOD | News | Rapid TV News
By continuing to use this site you consent to the use of cookies on your device as described in our privacy policy unless you have disabled them. You can change your cookie settings at any time but parts of our site will not function correctly without them. [Close]

US to add 108 million SVOD subscriptions

The number of US SVOD subscriptions for films, linear channels and TV episodes —but excluding other platforms such as sports — is set to climb from 199 million in 2019 to 307 million by 2025 says Digital TV Research. 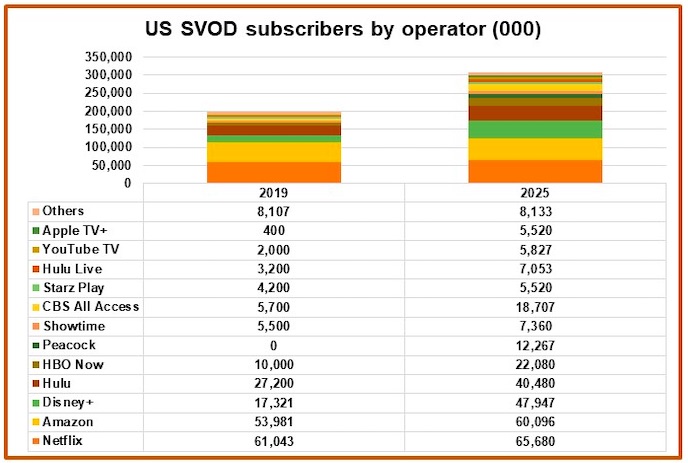 The North America OTT TV & Video Forecasts report research also found that a dozen platforms will have more than five million paying subscribers by 2025, revealing, said the analyst, just how far ahead in terms of choice the US market was compared with the rest of the world.

Digital TV Research also noted that growth for established players such as Netflix and Hulu will be muted due to intense competition from younger rivals such as Disney+, Peacock and the augmented CBS All Access.
Tweet