Freecast breaks loose with cord-cutting ad | OTT | News | Rapid TV News
By continuing to use this site you consent to the use of cookies on your device as described in our privacy policy unless you have disabled them. You can change your cookie settings at any time but parts of our site will not function correctly without them. [Close]

FreeCast’s SelectTV has launched a series of 300minute infomercials airing across the US, advertising the company’s new cord-cutting kit. 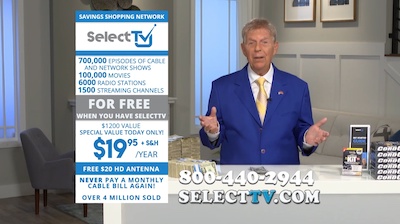 The new sales initiative is designed to position SelectTV at the heart of cord-cutting, helping consumers across the country who the firms says are frustrated with cobbling together newly offered video subscription services and streaming hardware into a manageable television experience.

The SelectTV cord-cutting kit includes a year of the SmartGuide service, an aggregator of major online content that makes navigating dozens of streaming apps and services as simple as using cable TV’s familiar on-screen guide. SelectTV can be used on most media-enabled devices such as smartphones, tablets, laptops, streaming devices, Android TVs, and select gaming systems.

Fronting up the major streaming players, SmartGuide has collected tens of thousands of free channels, on-demand TV episodes, movies, music, sports, and more, available to consumers willing to watch brief commercials. Included in the kit is an HDTV antenna to capture live local channels such as ABC, CBS, NBC, FOX, PBS and others over-the-air, absolutely free and without a local cable subscription. The kit also comes with a free digital copy of the Cord Cutting 101 eBook, as well as a vast library of how-to videos, and is all backed up with 24/7 live support from the company’s own branded Cord Cutting Crew.

“Across the country, SelectTV is selling. We worked with some of the best in the business to make sure that we do this right, and it’s paying off,” remarked FreeCast CEO William Mobley. “It’s putting our product on the radar, and it’s delivering the kind of customers we believe fit our product: cord-cutters, particularly those on tighter budgets, or who don’t have the time and technical skills to figure out which combination of services and devices will get their favourite shows on their TV without costing an arm and a leg.”
Tweet