Connected TV video ad impressions triple in two years | Ad Tech | News | Rapid TV News
By continuing to use this site you consent to the use of cookies on your device as described in our privacy policy unless you have disabled them. You can change your cookie settings at any time but parts of our site will not function correctly without them. [Close] 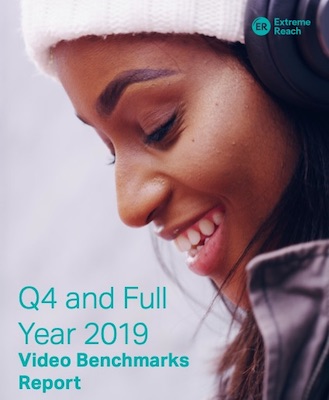 The company's latest Video Benchmarks Report, 49% of all video ad impressions were served to connected TV (CTV) platforms in 2019 - more than triple the 16% than those served in 2017. Furthermore, the study found that in just two years, CTV platforms have reshaped the digital video advertising landscape.

Based on aggregate metrics from ER's AdBridge platform, premium publishers are still preferred. It found that 81% of all video ads in 2019 were served into premium environments.

Extreme Reach said that advertisers likely want to see and know exactly where their ads will appear, rather than leaving that decision to an algorithm. Extreme Reach continues to serve and measure billions of impressions through DSPs, but the company said it was seeing far fewer impressions served through that channel versus premium direct.

In terms of popular formats, 30-second ads resumed the lead. On average, 30-second ads drove two-thirds of all impressions in 2019, with the highest proportion yet recorded by ER, 69%, occurring in Q4. This was a reversal of the 2017 average, when "snackable" mobile viewing dominated and 62% of impressions were for 15-second spots.

On the other hand the data showed that the experiment with longer ads has waned: 60-second ads, which had shown a marked increase throughout 2018, perhaps fuelled by the unskippable nature of CTV, accounted for less than 1% of ads served in Q4 2019.

Media aggregators were found to be shining brightly too, especially in key areas. Though the percentage of impressions served to media aggregators was found to have decreased from 26% in Q4 2018 to 19% in Q4 2019, ER's report reveals aggregator strength in a few significant areas. Completion rates, a key performance indicator for advertisers, rose more than 12% -- from 73% in Q4 of 2018 to 82% in Q4 2019. Extreme Reach described this as a significant jump that bodes well for all parties, as aggregation offers a layer of efficiency and scale for marketers seeking reach and frequency beyond premium direct buys.

One interesting trend revealed was the emergence of direct-to-consumer (DTC) brands and the changing inventory mix. DTC brands said Extreme Reach were thriving, with rapid growth fuelled by the ease with which brands can connect with consumers directly via digital channels. In the year that ER has specifically tracked DTC video ad metrics, brands in the category have doubled ad spend on average. While it noted that these brands overwhelmingly prefer premium media inventory, ER said it was beginning to see increases in impressions served to media aggregators. In Q1 2019, 99% of impressions were served to premium vendors. In Q4 that number decreased to 94%.

“It's amazing that, just two years ago, digital video advertising was all about mobile. Quarter by quarter, we've seen the paradigm shift to a new, CTV-centric reality," said Mary Vestewig, ER's senior director, video account management commenting on the 2019 Video Benchmark Report. “We expect to see fewer wild swings from quarter to quarter for the next year, but we do expect to see interesting trends driven by the growing number of AVOD players and the impact they have on the available inventory mix.”