US, Canadian pay-TV revenues set to plummet $50BN by 2025 | Media Analysis | Business
By continuing to use this site you consent to the use of cookies on your device as described in our privacy policy unless you have disabled them. You can change your cookie settings at any time but parts of our site will not function correctly without them. [Close]

After peaking in 2015 at $112 billion, pay-TV revenues in Canada and the US are projected to take one almighty fall over the next five years to total $62 billion in 2025 according to a study by Digital TV Research. 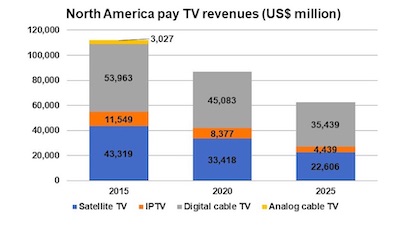 Attributing reasons for the expected slump, Simon Murray, principal analyst at Digital TV Research, said: “The loss of 42 million pay-TV subscribers between 2010 and 2025 is mostly responsible for this decline. Operators now put more emphasis on broadband connections than on traditional pay-TV channels.

“Subscribers are turning against high traditional pay-TV fees by seeking cheaper alternatives. OTT allows viewers to see what they want when they want – they are not tied to the channels’ schedules. The value of the linear schedule for recorded programming is rapidly diminishing.”

The alarming North America Pay TV Forecasts report forecasts that revenues will drop across the board. Cable revenues are expected to decline by $22 billion, $3 billion less for analogue cable and $19 billion lower for digital cable. Satellite TV will fall by $21 billion and IPTV will drop by $7 billion.