Bob Iger steps down as Disney CEO | Major Businesses | Business | News | Rapid TV News
By continuing to use this site you consent to the use of cookies on your device as described in our privacy policy unless you have disabled them. You can change your cookie settings at any time but parts of our site will not function correctly without them. [Close]

In a shock move for the media and entertainment industry, Bob Iger has stood down as chief executive of The Walt Disney Company, replaced immediately by chairman of Disney parks, experiences and products Bob Chapek. 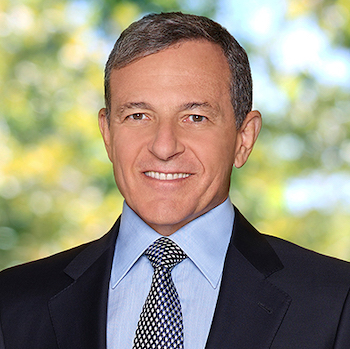 Iger (pictured) has been at the helm of the House of Mouse since 2005 and had overseen huge changes in the organisation and also huge revenues. He was responsible for the acquisitions of acquisitions of Pixar in 2006, Marvel in 2009 and Lucasfilm in 2012. Most recently he was responsible for the mega deal that saw Disney acquire select assets from 21st Century Fox and the creation of the Disney+ direct-to-consumer service which has been a runaway success since its launch in November 2019. While stepping away for the role of CEO, Iger will stay at Disney until the end of 2021 assuming the role of executive chairman and will direct the Company’s creative endeavours.

“With the successful launch of Disney’s direct-to-consumer businesses and the integration of 21st Century Fox well underway, I believe this is the optimal time to transition to a new CEO,” Iger said, explaining his decision.

“I have the utmost confidence in Bob [Chapek] and look forward to working closely with him over the next 22 months as he assumes this new role and delves deeper into Disney’s multifaceted global businesses and operations, while I continue to focus on the Company’s creative endeavours. Bob will be the seventh CEO in Disney’s nearly 100-year history, and he has proven himself exceptionally qualified to lead the Company into its next century…Under Bob’s leadership as CEO, our portfolio of great businesses and our amazing and talented people will continue to serve the Company and its shareholders well for years to come.”

Chapek has served as Chairman of Disney Parks, Experiences and Products since the segment’s creation in 2018, and prior to that was Chairman of Walt Disney Parks and Resorts since 2015. In his new role as CEO, Chapek will directly oversee all of the Company’s business segments and corporate functions. He will report to the Iger and the rest of the Board of Directors.

Commenting on his appointment, Chapek said: “I am incredibly honoured and humbled to assume the role of CEO of what I truly believe is the greatest company in the world. I share [Iger’s] commitment to creative excellence, technological innovation and international expansion, and I will continue to embrace these same strategic pillars going forward. Everything we have achieved thus far serves as a solid foundation for further creative storytelling, bold innovation and thoughtful risk-taking.”