DAZN Media launches global football package | VOD | News | Rapid TV News
By continuing to use this site you consent to the use of cookies on your device as described in our privacy policy unless you have disabled them. You can change your cookie settings at any time but parts of our site will not function correctly without them. [Close]

Aiming to rival the traditional sponsorships that have to date defined the beautiful game, DAZN Media has launched its biggest-ever football package, aggregating the DAZN Group’s digital football media assets across OTT, social and VOD for the first time. 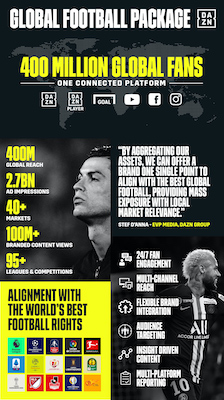 DAZN believes that its Global Football Package will enable a brand to centralise its fan-targeted, football sponsorship through one point of purchase and unlock unprecedented global scale. The company’s proposition will be to offer one brand partner the opportunity to reach more than 400 million football fans in over 40 markets, across the aggregated OTT, on-demand and social platforms. These are said to have delivered over 2.7 billion media impressions and 100 million branded content video views.

It also includes headline sponsorship across Goal, the world’s number one football platform, sponsorship of VOD football content across DAZN and Goal’s YouTube channels and the DAZN Player video network, which syndicates content to thousands of the world’s biggest publisher sites including Mail Online, MSN and Kicker.de.

To support these media and sponsorship placements, DAZN Media says that it has built an extensive multi-platform branded content offering into the package, powered by its creative team.

“We feel this is a step change in how brands can align with premium football and target fans. It’s a package that will rival any mainstream football sponsorship,” explained DAZN Group EVP Media Stefano D’Anna. “Football content consumption is fragmenting and reaching modern digital audiences is getting harder and harder. By aggregating our assets, we can offer a brand the best global football with localised relevance. All underpinned by digital targeting, delivery and reporting that ensures accountability and limits wastage.”
Tweet