paus streaming platform forges Raindance partnership | OTT | News | Rapid TV News
By continuing to use this site you consent to the use of cookies on your device as described in our privacy policy unless you have disabled them. You can change your cookie settings at any time but parts of our site will not function correctly without them. [Close]

As it preps for its launch in March, the paus ad-free, subscription-free streaming service that rewards and supports independent filmmakers via digital micro-tipping, has inked a content deal with the Raindance film festival. 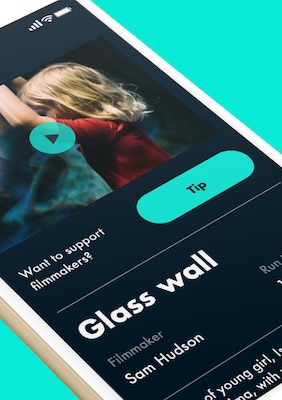 paus aims to allow filmmakers to put their content in front of an audience that embraces and supports them. Creators are invited to submit their shorts or docs to the free paus platform to share their work with a like-minded community of independent film fans. Once films are live on the paus app, audiences and supporters can show their appreciation by leaving a tip.

The digital tipping feature, said to be unique, allows audiences to tip any film or filmmaker they want to support from any amount ranging from 10p to £1000+, at any time. paus is integrated with native digital payment methods, such as Apple Pay. The platform provider says that unlike other video platforms, the scales are weighed in the creator’s favour as they keep 80% of every single tip.

As the largest independent film festival in the UK, Raindance attracts over 10,000 submissions each year, from which around 200 features and shorts are selected to screen. Raindance is also a qualifying festival for the Oscars, BAFTA and BIFA. It will be from this programme of UK and international independent films that the Best of Raindance’ selection will be made and featured on paus.

“At paus we share Raindance’s passion for independent film. Our partnership will enable great stories to be seen, by enabling filmmakers to get their content in front of an audience that embraces and supports them,” said paus CEO and founder Rishi Kapoor. “We don’t believe in barriers - there are no ads on paus, and we don’t ask people to subscribe to enjoy quality film. We have created paus as the platform for filmmakers to flourish.”

Elliot Grove, founder of Raindance added: “Thanks to Raindance’s partnership with paus, short filmmakers now have a new platform to share their stories with an even bigger year-round global audience. It’s an opportunity that we at Raindance are excited to be a part of, and we can’t wait to see many amazing short films and documentaries making their debut on paus.”
Tweet